What were once thought to be the fossils of a separate & smaller genus of the T-Rex turned out to be the remains of juveniles of their kind. 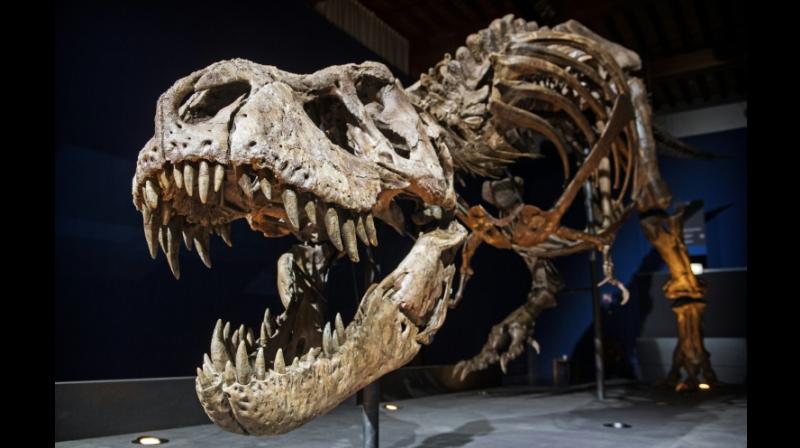 The researchers estimated the specimens' ages at the time of death by counting their cyclical growth marks, a series of lines in the femur and tibia (Photo: AFP/Representational)

What were once thought to be the fossils of a separate and smaller genus of the Tyrannosaurus Rex turned out to be the remains of juveniles of their kind. Analysis of thin slices of bone from two fossil specimens at the Burpee Museum of Natural History in Illinois revealed that they belonged to young T. Rex who died before going through a major phase of growth.

The co-author of this study, Scott Williams said, "That's even cooler (than their being a separate genus,) because that tells us they go through a drastic change when they grow up from these sleek, slender, fleet-footed T. rexes with these wonderful knife-like teeth to these big, monster, plodding crushing tyrannosaurs that we are familiar with. It also tells us these animals probably dominated their ecosystems at all ages even as juveniles."

The results support the hypothesis that T. rex experienced a period of exponential growth late in their development. They also support that a skull specimen at the Cleveland Museum of Natural History, which was classified as a separate genus in 1988 (Nanotyrannus), is actually a young T. rex. Although most specialists now reject the idea that the specimen belongs to a separate classification, previous studies used characteristics of one of the Burpee Museum skulls to justify the classification.

To assess the age and growth rate of the T. rex specimens, Holly Woodward et al. compared the organization of bone fibers and other microstructures in the two Burpee specimens, finding that they appeared to have been growing, as evidenced by growth rings in the bone in a spaced-out pattern not typically seen in adults. The bones also lacked the closely spaced series of lines present in adults that signal growth is complete.

The researchers estimated the specimens' ages at the time of death by counting their cyclical growth marks, a series of lines in the femur and tibia that, like tree rings, that record periods of development.

Woodward and colleagues suggest reaching full size after a period of prolonged adolescence may have meant that juveniles and adults fulfilled different roles in the ecosystem, such as feeding on different prey.