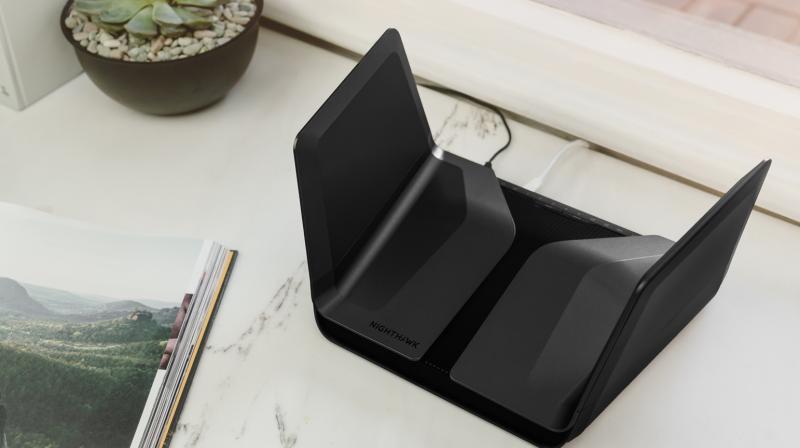 Netgear launches tri-band Wi-Fi 6 routers; the Nighthawk AX4 & AX8 in Bengaluru. Wi-Fi 6 — the latest generation of Wi-Fi – delivers up to four times better performance than Wi-Fi 5 (802.11ac) using innovative technologies such as Orthogonal Frequency-Division Multiple-Access (OFDMA) to help maximize the capability to connect multiple devices at the same time, which will help reduce the congestion for the typical bandwidth starved connected home. Wi-Fi 6 will provide a huge boost in total network capacity and reliability, ushering in a new era of speed, performance and capacity for wireless networking in today’s homes. The actual quality of the connection for each Wi-Fi device will also be improved by reducing the interference between them, thus ensuring that the experience of lag or buffering is reduced during online gameplay or streaming Ultra HD 8K/4K.

The Nighthawk AX8 features blazing-fast combined Wi-Fi speeds up to 6Gbps with an award-winning design recognized by both Red Dot and iF Design awards. Eight Wi-Fi spatial streams - four in the 2.4GHz band, and four in the 5GHz band - offer four times the device capacity as compared to typical 2x2 AC Wi-Fi. Multi-Gig Internet enables customers to get more than one Gbps of the Internet through aggregation.

The NETGEAR Nighthawk tri-band Wi-Fi 6 routers, AX4 and AX8 are available through authorized NETGEAR partners, other reseller channels and e-commerce portals. The AX4 is priced at Rs 29,999 while the AX8 costs Rs 39,999.