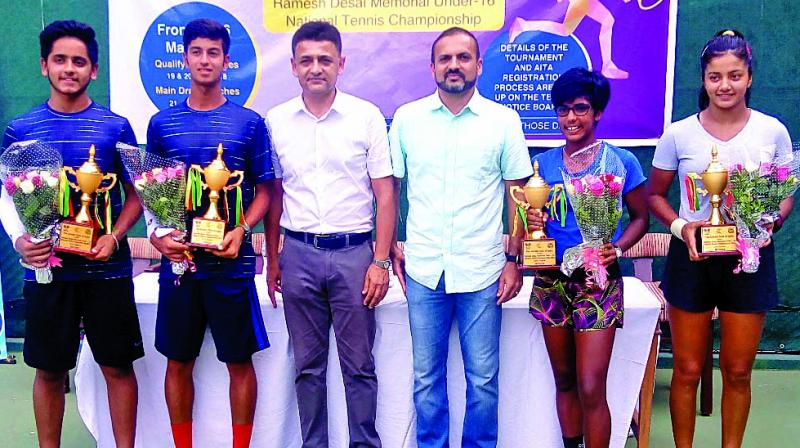 The winners during the prize distribution function of the MSLTA

They defeated the Maharashtra pair of Richa Chougule and Prerna Vichare 6-3, 6-3 in the final at the Cricket Club of India tennis courts, Churchgate.

In the boys’ doubles final, Uddayvir Singh of Chandigarh and Dhruv Tangri of Punjab worked hard to overcame the Haryana doubles combination of Sushant Dabas and Divesh Gahlot, winning at 6-3, 3-6, 10-8.

Meanwhile, the second-seeded players, Udit Gogoi of Assam and Prerna Vichare of Maharashtra, both tumbled out in the penultimate round, losing to Haryana’s fourth seed Divesh Gahlot and Maharashtra’s Sudipta Senthil Kumar respectively in the boys’ and girls’ singles events.

The lad from Haryana, Divesh, ranked number seven, two places below his Assam opponent Udit on the AITA ranking list, fought with grit and determination as he recovered after losing the opening set. Later he did well to punish the erratic Udit by winning the next two sets to come out trumps, by a 3-6, 6-0, 7-6 (5) scoreline on Friday morning at the CCI tennis courts.

In contrast, Sudipta, ranked 18 on the AITA list, was dominant from the start against the third ranked Prerna and she hardly put a foot wrong and won the first set without dropping a game.

With Prerna unable to offer much of resistance, Sudipta conceded just two games in the second set as she quickly closed out the match, crushing her opponent 6-0, 6-2 and to set up a summit clash with Sandeepti Rao of Haryana.

Sandeepti quelled a spirited challenge from qualifier Vipasha Mehra in two closely contested sets. Ranked 63rd on the AITA ranking list, the Pune-based Vipasha, who had defeated eighth seed Gargi Pawar and fourth seed Sanya Singh in the previous rounds, made Sandeepti work hard for her points. Both player slugged it out from the baseline.

But the 17th ranked Sandeepti cleverly kept the ball in play and waited for her rival to make the errors, which she capitalised on. She went on to clinch a deserving 7-6(3), 7-6 (5) victory and a shot at the title.