According to him Bopanna and Divij are the first choice for doubles and Prajnesh Gunneswaran was a revelation with a bronze medal show at Jakarta. 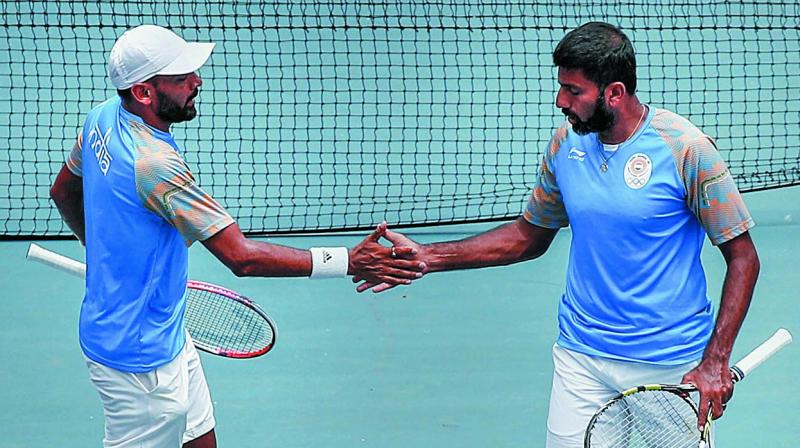 Absence of Paes from the Asian Games raised many eyebrows and the team, led by Zeeshan Ali, had to make last-minute changes.

Selection committee chairman S. P. Mishra though said that Paes’ Asiad absence wasn’t taken into consideration while selecting the squad. “As far as Paes’ absence from the Davis Cup team is concerned he has not played much this year and his ranking is also low. Paes’ absence from the Asian Games has nothing to do with the Davis Cup team. We picked the team purely on the basis of rankings,” Mishra told this newspaper on Tuesday.

Saketh Myneni and country’s No.1 singles player Yuki Bhambri return to the squad for the World Group play-off tie to be played on indoor clay at the Kraljevo Sports Venue in Serbia from September 14 to 16. Prajnesh Gunneswaran and Ramkumar Ramanathan were other names in team while Sumit Nagal failed to retain his place.

“Rohan Bopanna and Divij Sharan are in red-hot form and they just clinched the Asiad gold so they deserve to be in team without doubt,” Mishra added.

‘We cannot doubt Paes’ credibility’
Coach Ali said Paes remains a top-notch player who can be called up for national duty. “We cannot doubt Paes’ credibility; he will remain one of the best players of our country. He skipped the Asian Games for reasons best know to him. May be he wanted to improve his ATP rankings rather than playing for the country at Asiad,” Zeeshan, who returned from Indonesia on Monday, said.

According to him Bopanna and Divij are the first choice for doubles and Prajnesh Gunneswaran was a revelation with a bronze medal show at Jakarta. “I am so happy the way Bopanna and Divij gelled in Pelambang but they need to play more together. Prajnesh played superbly and deserves to be in the team.”