Rafael Nadal can win his 15th Grand Slam title, closing the gap on Roger Federer, who has 18 major titles to his name. 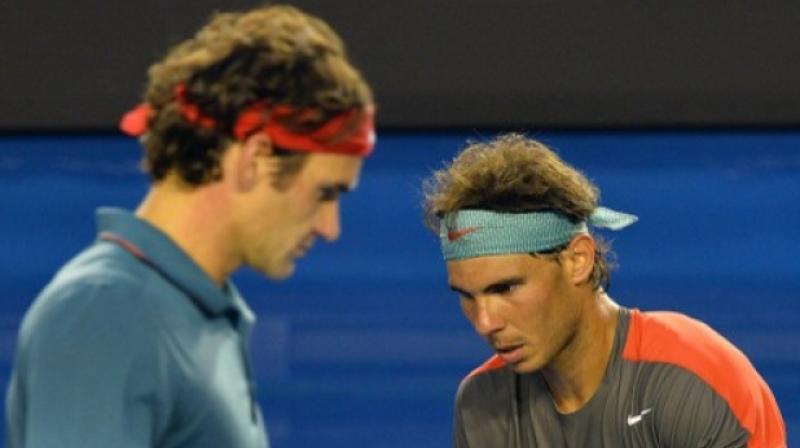 It's a final that nobody saw coming but after the early exits of Andy Murray and Novak Djokovic, the old rivals have seized their opportunity with both hands. (Photo: AFP)

Melbourne: Roger Federer and Rafael Nadal will collide in a hugely anticipated Australian Open final on Sunday after both veterans beat the odds to open a new chapter in their thrilling Grand Slam rivalry.

Federer, 35, will become the oldest Grand Slam finalist in 43 years, while Nadal, 30, has defied a series of injuries to reach his first major title match since he won the 2014 French Open.

It's a final that nobody saw coming but after the early exits of Andy Murray and Novak Djokovic, the old rivals have seized their opportunity with both hands.

For Federer, it's a chance to extend his all-time record tally of Grand Slam wins to 18, and exact a measure of revenge on his long-time nemesis.

Nadal can win his 15th Grand Slam title, closing the gap on Federer and drawing level with Pete Sampras in second place on the all-time list of major-winners.

It comes after Serena and Venus Williams, aged 35 and 36 respectively, met in the women's final -- making it the first Open-era Grand Slam tournament where all four singles finalists have been in their thirties.

Neither of the former world number ones was expected to reach the final after injuries disrupted their seasons last year and their rankings dipped, to 17 for Federer and nine for Nadal.

The unexpected reprise of one of tennis's great rivalries will be their ninth meeting in a major final, the most between any two players in the post-1968 Open era.

Nadal has won six of their major finals, with Federer's last victory in 2007. But the Spaniard said past results were irrelevant.

May the best man win

"It's a different match, different moment for both of us. I think this match is completely different than what happened before," he said.

"It's special. We have not been there in that situation for a while, so that makes the match different.

"I really don't think about what happened in the past. I think the player who plays better is going to be the winner."

The pair last contested a Grand Slam final at Roland Garros three years ago. They also met in the Australian Open semi-finals in 2014, with Nadal winning each time.

"Now it's a different time. A lot of time has gone by," Federer said. "I know this court allows me to play a certain game against Rafa that I cannot do on centre court at the French Open."

It will be Federer's sixth Australian Open final and his 28th Grand Slam decider in total, and caps a marvellous comeback after the second half of last season was wiped out by a knee injury.

He has thrilled his many fans with his revival, having not figured in a Grand Slam final since the 2015 US Open.

"This is the last one (match) so I will leave it all out here in Australia and if I cannot walk for another five months I will give it all I have," Federer said.

Federer can become the first man to win five or more titles at three Grand Slam events, while Nadal stands to become the only man in the Open era to win all the majors at least twice.