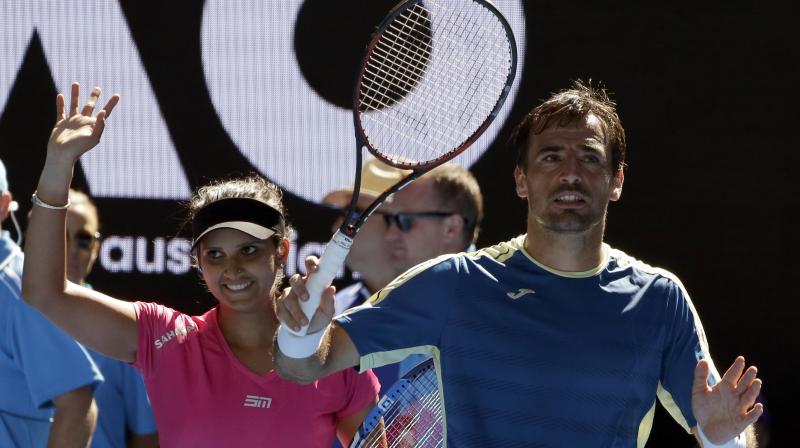 Sania Mirza is into her fourth mixed doubles final at the Australian Open. (Photo: AP)

Melbourne: Sania Mirza and Ivan Dodig overcame the local pair of Samantha Stosur and Sam Groth in a hard-fought game to reach the mixed doubles final at the Australian Open.

Mirza and her Croatian partner Dodig needed an hour and 18 minutes to win 6-4, 2-6, 10-5. Their opponents in the final will be either the pairing of Elina Svitolina/Chris Guccione or Abigail Spears/Juan Sebastian Cabal who contest the other semifinal later today.

All four players were struggling with their serve throughout the game with five of the seven breaks coming in the opening set.

Before the start of the second set, Groth received treatment on his neck and was forced into taking a medical timeout with the physio tending to him for an extended period.

In the tiebreaker, Dodig improved his serve to give the Indo-Croatian pairing an 8-3 lead. Mirza would then go on to close the match on the second set point opportunity with Dodig playing well at the net to hit the volley into Stosur’s body.