Rafael Nadal set up a dream final with Roger Federer after beating Grigor Dimitrov in five sets in the semifinals of the Australian Open. 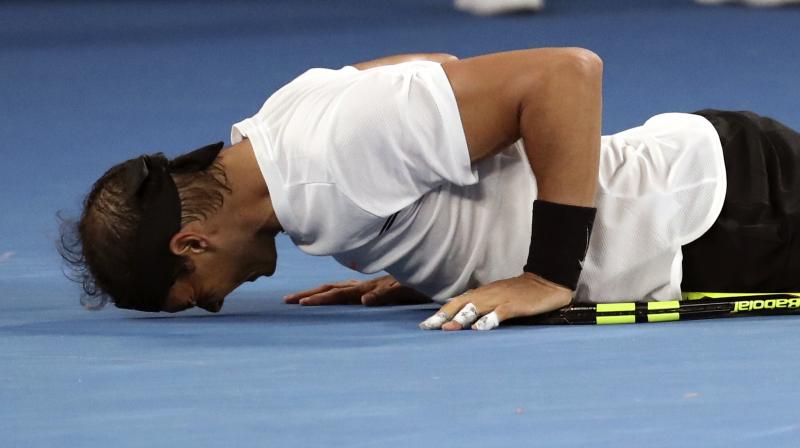 Melbourne: Rafael Nadal had to be at his battling best to outlast Grigor Dimitrov 6-3 5-7 7-6(5) 6-7(4) 6-4 at the Australian Open on Friday and set up a mouth-watering ninth grand slam final meeting with his great rival Roger Federer.

The 30-year-old Spaniard looked every inch a 14-time Grand Slam champion as he slugged it out with his 25-year-old opponent over nearly five hours on Rod Laver Arena to reach his first major final since the 2014 French Open and 21st overall.

"Grigor was playing unbelievable, it was a great match," Nadal said. "I feel very happy to be part off it, I enjoyed it a lot. To qualify for the final in a match like this is amazing."

Dimitrov, riding high on a 10-match winning streak and seeking his first Grand Slam final, did his best to keep the twenty-something standard flying into the weekend, firing 79 winners.

There were no signs of the mental frailties that have prevented Dimitrov from fulfilling the potential promised by his nickname "BabyFed" as he went blow-for-blow with the powerful left-hander.

Ninth seed Nadal had conceded only six breaks in reaching the final four but was forced to save two break points in the opening game alone, setting the tone for a frenetic evening.

The 2009 champion soon hit his stride, though, and a booming pass that the world number 15 was unable to get back gave Nadal a break for 3-1 and he wrapped up the opening set in 35 minutes.

The Bulgarian refused to buckle, though, and pounced to break to love for a 3-1 lead in the second set, Nadal perhaps distracted by a time violation warning. From there, the set descended into chaos with both players broken twice and Nadal forced to save four set points before Dimitrov evened up the contest on the fifth.

The break points continued to come thick and fast in the third set, Nadal converting his third and Dimitrov his fourth to keep the set on serve. After a short break while a spectator received medical attention in the stands, Nadal held for 6-6 and the set went into a tiebreaker.

Nadal missed a large part of the 2016 season because of a wrist injury but proved there was nothing wrong with his fitness as he scrapped to win it, sealing the deal with a blistering forehand which Dimitrov parried into the net.

With the break points having dried up completely in the fourth set, a tiebreaker looked inevitable and Dimitrov quickly took control of it before serving up a 195 kph bomb to send the contest into a decider.

There were chances for both men in the fifth but, with midnight long past, Nadal came to the net to punch a backhand into the back court, break for 5-4 and earn the right to serve for the match.

Still Dimitrov would not lie down, though, and Nadal needed three match points to win his 12th straight Grand Slam semi-final and reach his fourth Australian Open final.

"I don't think either of us thought we would be playing in a major final at the Australian Open," Nadal said of him and Federer. "First of all I hope to recover well, I think it's a privilege for both of us."