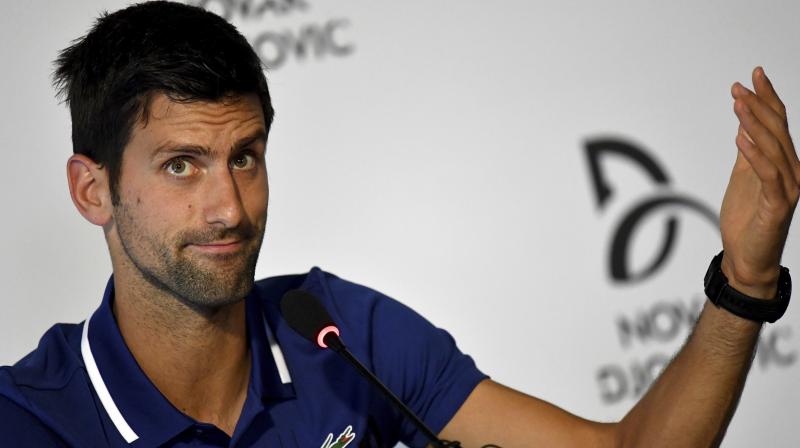 Novak will give his elbow and body the proper time to recover to come back strong and in the best shape in 2018. (Photo:AP)

Belgrade: World Number four Novak Djokovic announced on Wednesday that he will miss the rest of the season with an elbow injury.

Djokovic, who has been struggling with form this season, suffered a fresh blow earlier this month when an elbow injury curtailed his chance to lift the Wimbledon title for the fourth time.

The Serbian came into the match with a 25-2 head-to-head record against Tomas Berdych, but retired while trailing 7-6(2), 2-0 in the quarter-finals.

In a Facebook Live broadcast, and also via his official website, the former world number one admitted, "My elbow is hurt due to excessive playing, and it troubles me constantly when serving, and now when hitting my forehand as well. Unfortunately, such injuries are often encountered in a professional sport, and I am very proud of the fact that I have been free from serious injuries during all these years."

"All the doctors I've consulted, and all the specialists I have visited, in Serbia and all over the world, have agreed that this injury requires rest. A prolonged break from the sport is inevitable. I'll do whatever it takes to recover. I will use the upcoming period to strengthen my body and also to improve certain tennis elements that I have not been able to work on over the past years, due to a demanding schedule. Five months may seem long from this point, but I'm sure they will pass quickly because there is so much I want to do," he added.

The Serbian maestro has endured a turbulent 12 months after becoming the first man since Rod Laver in 1969 to hold all four grand slams at the same time following his French title last year.

He has failed to add another major title to his account, bowing out of the Australian Open in the second round before making a quarter-final exit at the French Open.

Aiming to return to full health, Novak will give his elbow and body the proper time to recover to come back strong and in the best shape in 2018