Williams, 35, has come a long way since her last meeting with Lucic-Baroni in the second round at Wimbledon in 1998. 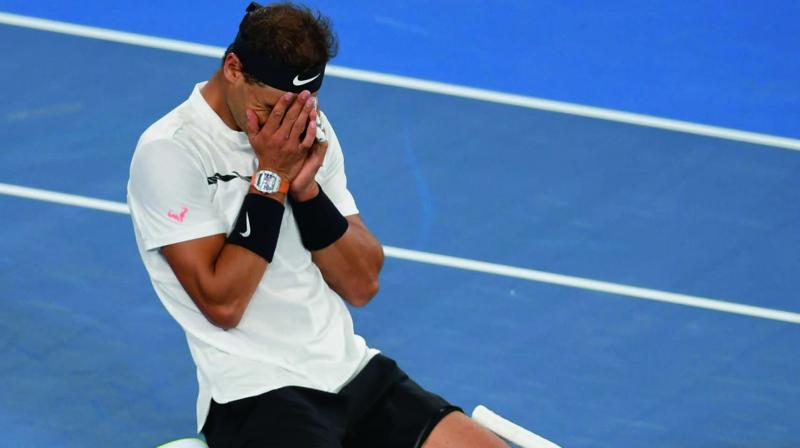 Spain’s Rafael Nadal celebrates his 6-4, 7-6 (9/7), 6-4 win over Milos Raonic of Canada in their Australian Open quarter-final in Melbourne on Wednesday. (Photo: AFP)

Melbourne: A resurgent Rafael Nadal beat Milos Raonic to reach his first Grand Slam semi in three years at the Australian Open on Wednesday, as Serena Williams eyed a final with her sister Venus.

Nadal hasn’t contested a major semi-final since he won the last of his 14 Grand Slam titles at the 2014 French Open, but he never looked like losing to Raonic, the Canadian world number three. Spain’s Nadal yelled in delight as he completed a 6-4, 7-6 (9/7), 6-4 win which set up a semi-final with Grigor Dimitrov — with old rival Roger Federer potentially waiting in the final.

“Even though I had a great career, I had a lot of tough moments,” said Nadal, who struggled with injury last year and failed to reach any of the Grand Slam quarter-finals. “That makes me enjoy this even more.” Nadal has a 7-1 head-to-head record with Dimitrov, the Bulgarian 15th seed, who earlier ousted Belgium’s David Goffin 6-3, 6-2, 6-4. The women’s competition also has a retro feel after Serena Williams beat Britain’s Johanna Konta 6-2, 6-3 to set up a semi-final with an emotional Mirjana Lucic-Baroni — 19 years after they last met as fellow teenage prodigies.

Williams, 35, has come a long way since her last meeting with Lucic-Baroni in the second round at Wimbledon in 1998, when they were both 16 and without a trophy to their names. While Williams is now eyeing an Open-era-record 23rd Grand Slam title and a return to world number one, the Croatian is into her first major semi since 1999 after her career was derailed by personal trauma.

Unseeded Lucic-Baroni wept freely and gasped, “This has truly made my life,” after she upset Czech world number five Karolina Pliskova 6-4, 3-6, 6-4. “I can’t believe this. This is crazy,” said the 34-year-old, who disappeared from the tennis scene after being forced to flee her abusive father in Croatia. “The only thing I can say is, God is good. That’s all I can say. I can’t believe it. I feel a little bit in shock.”

Williams, whose sister Venus plays Coco Vandeweghe in Thursday’s other women’s semi, said she could take inspiration from Lucic-Baroni. “I’m really happy for Mirjana. I was there when she first started. To see her be able to never give up actually is super-inspiring to me. It’s a wonderful story,” she said.

Williams added: “We both have gone through a lot. We both have survived, and here we are, which I think is a really remarkable story.” There was little disappointment from Konta despite her steamrollering by Williams, who was able to raise her game to counter her opponent’s court speed and aggressive striking.