Rafael Nadal eased past Milos Raonic in straight sets to enter his first Grand Slam semifinal since the 2014 French Open. 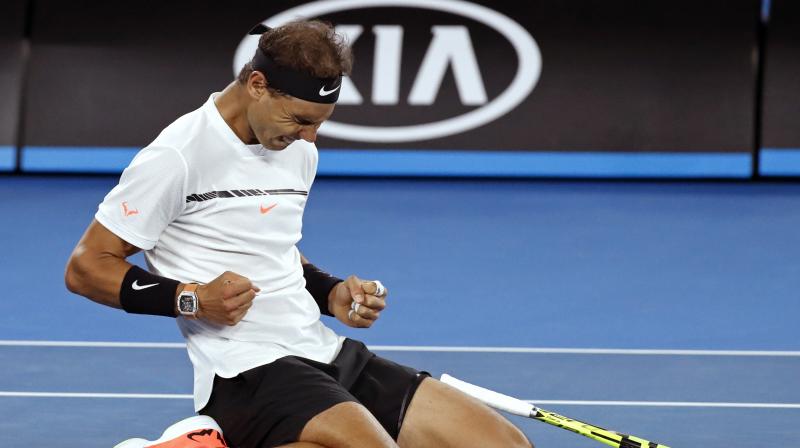 Rafael Nadal exults after winning his quarterfinal against Milos Raonic at the Australian Open in Melbourne. (Photo: AP)

Melbourne: Rafael Nadal beat third seed Milos Raonic 6-4, 7-6 (7), 6-4 to reach the Australian Open semifinals, returning to the last four at a Grand Slam tournament for the first time since winning the 2014 French Open.

Nadal's return ensures there will be three 30-somethings in the men's semifinals, equaling the Open era mark set at Roland Garros in 1968. Nadal will play Grigor Dimitrov on Friday, the day after 35-year-old Roger Federer takes on 31-year-old Stan Wawrinka in an all-Swiss semifinal.

The win over Raonic was Nadal's 50th at Melbourne Park, where he won title in 2009 and lost in the final in 2012 and '14. The 30-year-old Spaniard saved six set points in the second set, including two in the 13-minute tiebreaker.

Nadal lost in the first round here last year and had extended injury layoffs before and after the U.S. Open to let his left wrist recover from injury.

Raonic last year reached the Australian Open semifinals, when he was hampered by a hip injury and lost to Andy Murray after leading by two sets-to-one, and went on to reach the final at Wimbledon.

He improved to a career-high year-end No. 3 ranking and beat Nadal in three sets in the quarterfinals at the tuneup event in Brisbane earlier in the month.

Earlier in the day, Grigor Dimitrov of Bulgaria notched a 6-3, 6-2, 6-4 win over No. 11 David Goffin to reach only his second Grand Slam semifinal. It was the No. 15-seeded Dimitrov's fifth win from as many meetings with Goffin. He's on a roll in Australia after winning the Brisbane International tuneup tournament ahead of the season's first major.