This is the first time Ankita has progressed in the main round of a WTA event and she will now meet unseeded Amandine Hesse in the quarter-finals. 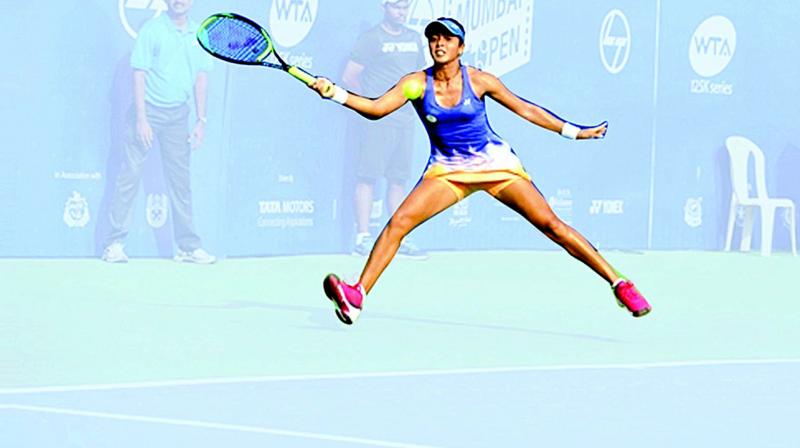 This is the first time Ankita has progressed in the main round of a WTA event and she will now meet unseeded Amandine Hesse in the quarter-finals.  The French girl who knocked out Arina Rodionova of Australia in first round accounted for Israel’s Deniz Khazaniuk 6-3, 4-6, 6-1 in the second round on Thursday after two hours 23 minutes. Deniz knocked out Rutuja Bhosale in the first round.

Wild card entrant Ankita came into the game as an underdog but she played like a champion. The unseeded Plipuech of Thailand had knocked out sixth seed Lizette Cabrera of Australia in the first round and she had also beaten Ankita the last time they met in a WTA event.

Plipuech prefered slow game and returned everything initially as the Indian girl was getting into her stride. The Thai player broke in third game but Ankita won four points on the trot to broke back and level 2-2. The Thai was generating enough spin and was good close to the net.

Ankita found the answers she started to push her opponent beyond the baseline and it worked by earning another break and holding commanding 4-2 lead. She kept going and a clever forehand in the corner sealed first set 6-2 after 38 minutes of play.

The Thai player committed too many errors in the second set and allowed Ankita to impose authority and surge to 3-0 lead. Ankita was getting better with placement and unleashing drop shots smartly and hitting down the line with finese. But two hits at the net allowed Plipuech to hold game and the Thai broke after Ankita saved two breakpoints but couldn’t save third. But the world no 293 broke yet again and sealed the match in style displaying mixed emotions after 67 minutes of play.

“I lost to her in a three-setter last time in Hong Kong. My coach (Hemant Bendrey) was there at that time. We sat together today morning  and worked out the plan. She is a smart player and plays at her pace, today I guess she was tired. I didn’t let her affect my game. Her body language remains same whether leading or trailing,” she said.