Murray beat Novak Djokovic 6-3, 6-4 on Sunday to earn his first title at the ATP finals, and make sure he remained No. 1 until next season. 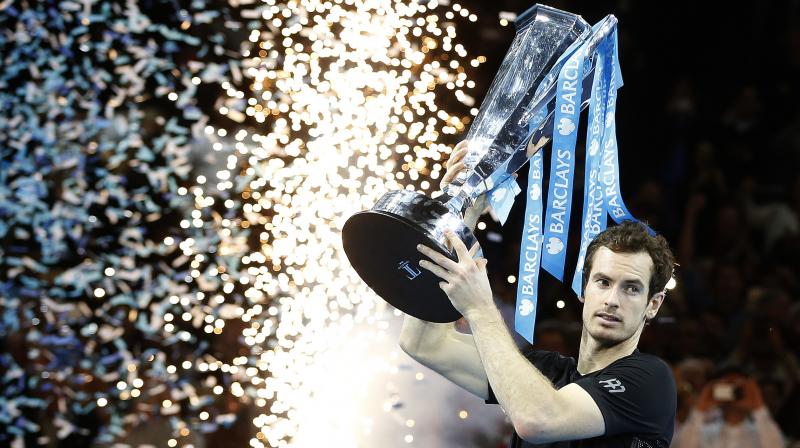 Murray replaced Djokovic as the top-ranked player in Paris, but the second-ranked Serb could have regained the No. 1 position by winning Sunday at the O2 Arena. (Photo: AP)

London: Without a doubt, Andy Murray will be the No. 1 player in the world for the rest of the year.

The Wimbledon champion needed to win the final match of the season to ensure his place at the top. And he did it, rather easily.

Murray beat Novak Djokovic 6-3, 6-4 on Sunday to earn his first title at the ATP finals, and make sure he remained No. 1 until next season.

"I would like to try and stay there, obviously. It's taken a huge effort the last five, six months to get there," said Murray, who took over the top ranking two weeks ago and has now won 24 straight matches.

"I'm aware that's going to be extremely difficult because I had a great year this year. I only managed to do it by one match."

Murray replaced Djokovic as the top-ranked player in Paris, but the second-ranked Serb could have regained the No. 1 position by winning Sunday at the O2 Arena.

And Murray seemed vulnerable heading into the final, especially after playing three sets against Milos Raonic in Saturday's semifinals. He started against Djokovic with a pair of double-faults in the opening game, but it was soon his opponent that was struggling with his serve as the unforced errors piled up.

"There was no serious chance for me to win today's match," Djokovic said. "From the very beginning we could see that. He was just a better player all in all."

In the first set, Djokovic had a routine smash that he whacked wide. And in the second, he netted a basic forehand volley.

It never got much better for the 12-time Grand Slam champion, who was trying to win a record-tying sixth title at the season-ending tournament and finish the year as the top-ranked player for the fifth time.

"I didn't do much from my side. Every time I would get an opportunity, I would miss," said Djokovic, who completed a career Grand Slam by winning the French Open this year.

Murray is the first man other than Djokovic, Roger Federer or Rafael Nadal to finish the year as the No. 1-ranked player since Andy Roddick in 2003.

He took over the top spot on November 7 after winning his eighth title of the season at the Paris Masters. He also reached the Australian Open and French Open finals, losing to Djokovic on both occasions, but won his second straight Olympic gold medal in singles at the Rio de Janeiro Games after claiming his second Wimbledon title.

"I was solid enough when I needed to be," Murray said, perhaps understating his accomplishment. "You never beat a player as good as Novak if you don't play well."

Sunday's match was the first time since 2000 that the year-end No. 1 ranking was on the line in the final match of the season. Sixteen years ago, Gustavo Kuerten beat Andre Agassi to give the Brazilian the top ranking ahead of Marat Safin.

Despite winning the opening two Grand Slam tournaments this year, Djokovic has struggled in the second half of the season. He lost to Sam Querrey in the third round at Wimbledon, ending a 30-match winning streak at major championships. He later lost to Stan Wawrinka in the U.S. Open final.

"Well, the last five, six months have not been ideal," Djokovic said. "But sometimes it's just normal, I guess, to experience, to live these kind of things, not to have the half seasons as well as you want them to be, as well as they've been in the last three, four years.