On her first visit to India, tennis icon Arantxa Sánchez Vicario talks about success, pressures, a lingering regret and the spirit of never giving up. 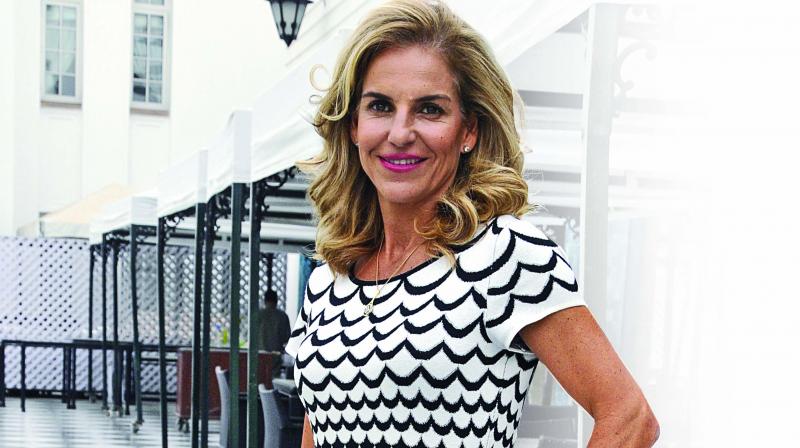 Charmed by her game, one of the most famous sports commentators, Bud Collins, called her the ‘Barcelona Bumblebee’ — a player who could sting her rivals. Those who have followed her game can narrate tales of what a fighter she was on court. “Because of my height and strength nobody thought I could win,” she reminisces and yet as a 17-year-old, she became the youngest winner of the women’s singles title at the 1989 French Open, when she defeated none other than the World No. 1 and almost invincible Steffi Graf.

But meet Arantxa Sánchez Vicario off the court, and you will find yourself in the company of a very easy-going and pleasing personality. She was in the capital recently courtesy her association with Rendez-Vous á Roland-Garros in partnership with Longines that saw her encourage young players to follow in her footsteps.

Flavours & colours of India
It was the first visit to India for the four-time Grand Slam winner. She says, “I have been to many countries before but I never got the chance to come to India because not many tennis tournaments were being hosted here. But Sania Mirza, Leander Paes, Mahesh Bhupathi and Rohan Bopanna have told me a lot about the country. You have palaces, temples and the Taj Mahal and also the beaches in the south. I also know that the food is great. I just had spicy butter chicken with rice. I am happy to be here and I am getting to experience it all a bit. Hopefully I’ll get to see more next time.”

The Spaniard also knows that what soccer is to her country, cricket is to India. “I don’t follow cricket because Spain doesn’t play it but I have seen it on TV and understand it,” she adds.

What also caught her eye was the fashion sense of Indians. “The women look very comfortable wearing the traditional dresses. I like the dresses as they are very bright and colourful. I’d like to take home a few beautiful silk scarves,” she says revealing her shopping plans.

Message to young guns
Though her career itself is a testimony of what unflinching determination can help one achieve, she had a few tips for the children she interacted. “I always tell the kids to give their best and try to be positive. It’s important for them to not get nervous and fight till the end. The way you practice, that’s how are going to compete. So, it’s very important that they practice hard. This is what I also did as a teenager. If you lose the first time, you will win the second time. Be it on the court or in life, you should never give up,” she says.

Loneliness of a tennis player
Many players say that tennis can be a very lonely sport and Arantxa agrees. “It’s true that tennis is a lonely sport because you travel ten months a year. You are away from home and you miss your friends and family. Tennis, being an individual sport, involves so much pressure on the player unlike team sports where your colleagues are there to support you. It requires great mental strength. But it also teaches you to be an independent person because you are always alone,” says the player who was crowned the ITF World Champion for the year in 1994.

‘I was a unique person’
It’s a rarity to see someone play both singles and doubles and do exceedingly well in both formats. But Arantxa did so and has ten more Grand Slams in doubles category. “For me, playing doubles improved my game and gave me a good practice for singles. You need to be physically very fit to be playing both formats because you are playing two matches every day. I was privileged as I never got injured. My mind and body had that ability that allowed me to play singles, doubles and mixed doubles. I miss the fact that no one does it now.  Maybe, I was a unique person,” she says with nonchalance.

Though she praises herself, there is no hyperbole. She continues, “I came from a country that had more male sport stars than women and I opened the floodgates for women. I was the icon of tennis in Spain and I am happy that many more champions followed. Maybe today I am seen as a living example that nothing is impossible.” She adds about Spanish players, “Carolina Marin is making badminton, a not-so-famous sport in Spain, quite popular. We are doing well in Formula 1, swimming and basketball thanks to sportspersons like Fernando Alonso, Mireia Belmonte and Gasol Brothers respectively. Spain is not a big country but we are really proud of the players who put the country on the sporting map.”

So, are all her favourite sportspersons from Spain? “No, I was a huge fan of Michael Jordan and Carl Lewis. I follow Usain Bolt. Obviously, I enjoy watching Rafa (Rafael Nadal) but I love Roger Federer a lot. He is unique,” she says. Well, there are no points for guessing the favourite football club of the Barcelona girl.

That Wimbledon loss…
She was a player known for her tenacity — not willing to concede a single point. And it’s been a career of achievements and success. But there’s one regret that still niggles. “The one win I really wanted but missed by a whisker was the 1995 Wimbledon final. It was an unbelievable match for me and I gave my best. But overall, my career has been very successful. As a kid, I never thought I would achieve so much. I’m pleased with my career and I’ve been inducted in the hall of fame. I couldn’t be happier.”

Her contenders on the other side of the court in Grand Slam finals have been Steffi Graff, Monica Seles and Mary Pierce. About the equation she shared with them off the court she says, “We were rivals on the court but had great respect for each other. I don’t see Steffi that often now but I do have great friendship with Monica Seles, Mary Pierce, Mary Joe Fernández, Iva Majoli and Martina Navratilova. Since we don’t play against each other now, we share a greater bond. We don’t talk tennis so much and rather try to have fun.”

On Arantxa Junior
Her daughter is her namesake, and she laughs that it was her husband’s idea to name their daughter Arantxa. “We had decided that if we had a girl, he would name her and if it was a boy, I would name him. In Spain, it’s sort of tradition that the first kid, if he is a boy, is named after the father. I cried when my husband said he would be naming our daughter after me,” she recalls.

The conversation comes to an end with Barcelona Bumblebee. “You know I have other nicknames as well — Angel of Barcelona and King of Paris. I like them all,” she laughs.