India face China in an away tie in search of a World Group playoff berth in the new format next month. 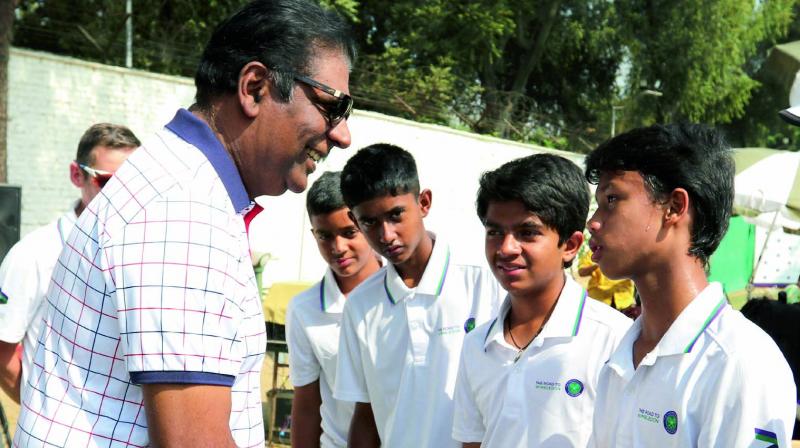 Vijay Amritraj at the Road To Wimbledon event in New Delhi on Tuesday.

New Delhi: In 118 years of Davis Cup history, the International Tennis Federation has introduced three-set matches in a two-day format for the first time instead of five-set matches across three days at the zonal level. The legendary Vijay Amritraj is not happy with the tinkering of the “traditional” format, asserting that it is not suitable for emerging countries like India.

“The three-day format is important for us because we have a singles player who will also be required to play doubles. The three-day format was a good one. It was a tried and tested format which worked very well,” Amritraj told this paper here on Tuesday.

“I am not crazy about the two-day format in the Davis Cup. I don’t think the format is a good thing because country like us need to have a good weekend of matches,” he added.

India face China in an away tie in search of a World Group playoff berth in the new format next month. The 64-year-old was critical of India’s show in the Davis Cup and said without singles players in top 50 it would be difficult to reach the World Group.

“We are more concerned about doubles players but we need four good singles players. They are most important as they give us four points. We have to try to get better singles players. To reach the World Group we need players in the top 50. Our players are not good enough because results have shown we are not good enough,” said Amritraj, part of the Indian Davis Cup team that reached the finals in 1974 and 1987.

Amritraj though was all praise for Yuki Bhambri and Ramkumar Ramnathan.

“For the last six seven months, Yuki and Ramkumar are consistent and have qualified for a couple of ATP events. I always said that their best years will be between 25 and 33 and not before that. We start comparing them with western kids but it is a bit early. Yuki had terrific performance at Indian Wells and he has a good chance to be in top-50. He is coming to his own.”

“No money to run CTL”
Amritraj, the brainchild behind the Champions Tennis League, said lack of money was the reason behind the discontinuation of the league.

“Its not easy to run a league. It costs… you need money. It is very difficult to put together (so many things like players’ expenses, venues and travelling) and you need lot of support to put those things together and we tried and keep trying.

“We are trying different formats for the CTL. Lets see what happens, nothing finalised yet.”

The 64-year-old was in the capital interact with participants in the Road to Wimbledon, the All England Lawn Tennis Club’s tournament for U-14 players. “This is a special event for the simple reason that you have a chance to go to Wimbledon and to see what it is all about. And two kids will have a chance to go there. That is a Godsend for them,” said Amritraj on behalf of Rolex, the official timekeeper of the Championships.