Balaji was in fine fettle at this point, firing in ace after ace. 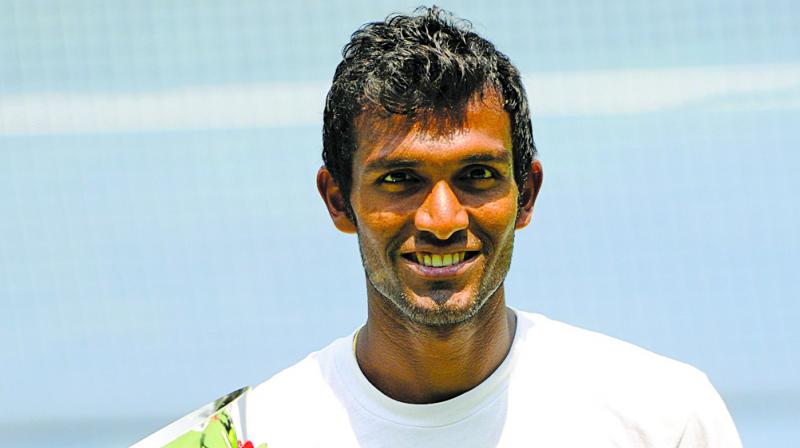 Bengaluru: N. Sriram Balaji celebrated his 27th birthday with a tempestuous 2-6, 6-3, 6-4 victory over his rival and top seed Prajnesh Gunneswaran to lift the F5 ITF Futures tennis tournament title at the KSLTA stadium here on Saturday. The trophy was Balaji’s ninth ITF title overall and second this year in what has been an excellent run-in to the upcoming Davis Cup tie against Uzbekistan, for both competitors.

In a match that ebbed and flowed nearly to the three-hour mark, Balaji had his vengeance over the man he lost to, at ITF Bhilai in Chattisgarh last week. From the start, Prajnesh was just more efficient in his strokes, finding his rhythm to force Balaji into errors. The breaks came along in the third and fifth games for Prajnesh, and he secured the first set 6-2 comfortably.

With his back against the wall, Balaji changed tactics to impact the match in his favour. The players held serve, with Balaji using his massive first serve to great effect. As his confidence grew, so did his advance to the net.

The points were cut short and in the eighth game, Prajnesh made a critical error, double-faulting whilst trailing by a break point to hand Balaji the advantage. He gratefully accepted, and served out the set 6-3.

Balaji was in fine fettle at this point, firing in ace after ace. The break came again in the eighth game, and world no. 363 Balaji used it to seal the issue with aplomb.

Current Sri Lankan players can have success both at home and abroad: Mickey Arthur