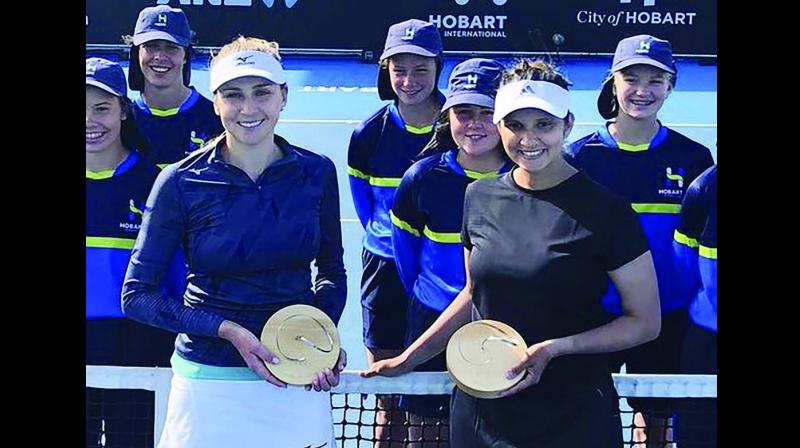 Hyderabad: Tennis ace Sania Mirza won the Hobart International title on Saturday. She may well have sealed the 2020 Mother of The Year award too, in the very third week itself.

In an incredible comeback, the 33-year-old returned from a two-year maternity break to combine with Nadiia Kichenok of Ukraine to beat Shuai Peng and Shuai Zhang of China in the women’s doubles final in Australia. Unseeded Sania-Nadiia punched above their weight to topple the second seeds in straight sets 6-4, 6-4 for a stupendous victory.

Sania’s 14-month-old son Izhaan was at the venue as Big Momma took her 42nd WTA doubles title, the first since Brisbane International in 2017. She then spoke to this newspaper. Excerpts from an interview:

How special is this win?
It’s really amazing, something that I could only dream of, to come back like this and win a tournament straightaway… not just two-and-a-half years later but also after becoming a mom and having Izhaan. There’s a lot of hardwork, sweat and blood that went into it. I am so glad that I was able to achieve this.

Tell us about the hardwork involved and the challenges faced?
There’s so many. Just the fact that your body completely changes as a woman after childbirth… it’s extremely different and difficult to get your body back in shape, to being at your fighting best to play tennis at the highest level. It’s the weight gain and a lot of other changes that happen. It’s not just losing those 23-26 kilos but about getting strong again and trusting yourself to be good enough to compete at the top level. There are so many things that go into it and there are other things like feeding, issues of time management, the baby needs your attention and how you take out time to put in hours of practice. There’s so much struggle that comes along with it.

What sort of mental toughness is needed to do all this?
I would think a lot (laughs). But it’s not something that I consciously thought of. I just went along with it… The very fact that I believed in myself goes to show that if you back yourself with hardwork, commitment and focus then anything is possible. I hope this inspires a few women, especially in our side of the world, to try and go after their dreams even after having a baby. It’s very important to understand that it’s tough but at the end of the day if you put your heart and mind to it, commit yourself and make a few sacrifices anything is possible.

You were surely not short of motherly inspirations from the world of sport though…
It’s so great to see so many mothers back, most definitely. They are competing at the highest level too. Serena (Williams) is obviously the most high profile one but there are many mothers out there. There’s Kateryna Bondarenko (of Ukraine) who is making a comeback after her second child as well! She had made a comeback after her first too. So there’s lot of inspiration around and also within.

What has been Izhaan’s reaction to your exploits on the court?
He just understands the celebratory high-five, which is close enough to him making out anything right now. I hope that one day he sees all this, understands the magnitude and is proud of his Mom.

What kind of support did you receive in your endeavour?
A lot, from my parents and my entire family which has been behind me, always. I would not have been able to give my 100 per cent if I didn’t have them with and pushing me as well. Then there are friends and coaches… I don’t think I could do without any of them.

What goals did you set for yourself when you came back on to the circuit?
I didn’t think I would get the title at first go but definitely did aim for it. You always enter a tournament to win it. However, I was being as realistic as possible and thought it would be great if I get a couple of matches in just before Melbourne (Australian Open, the season’s first Grand Slam), so it was more of that thought process than ‘ok, I have to go and win this tournament.’ The desire to win every match that you play comes naturally to an athlete but you also have to be a little realistic.

The title notwithstanding, how do you feel on the court? Are you back to your best or is there more to come?
I am pretty critical of myself so I don’t think I am back to my best by any measure but I do think I am playing better than I expected and close to how I used to play. I still think there are lots of things I can improve upon.

Having made a remarkable start to the season, what are you looking at now?
No targets per se. For me it’s about staying healthy, taking it one match/ tournament at a time and just see where it takes me. Honestly, where I want to reach is not something that I am thinking of consciously. I want to try to be as best as I can be and as good as I can be personally.