Djokovic out in 2nd-round upset loss to Istomin in Australia 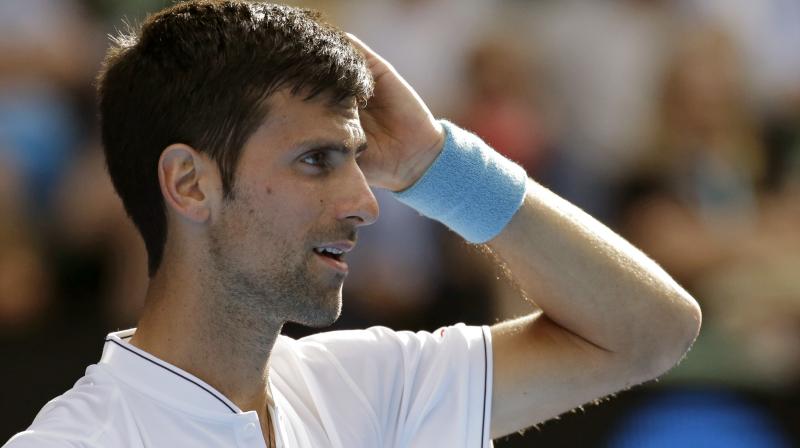 Djokovic was aiming to be the first man to win the Australian title seven times, and had never dropped a set in six previous meetings against Istomin. (Photo: AP)

Djokovic was aiming to be the first man to win the Australian title seven times, and had never dropped a set in six previous meetings against Istomin.

It was destined to be a long Thursday afternoon on Rod Laver Arena for Djokovic, though, when he needed 24 serves and a quarter of an hour to hold in the first game, saving six break points.

"All the credit to Denis for playing amazing. He deserves to win," Djokovic said. "He was the better player in the clutch moments - he stepped it up and played aggressive.

"Obviously, I was not pleased with my performance overall, but I have to congratulate my opponent. Whenever he needed - he came up with a big serve, big play."

Istomin, who dropped out of the top 100 last year, had never beaten a top 10 player at a Grand Slam tournament.

"It is the biggest win for me. It means so much," Istomin said. "Now I feel I can play with these guys, and to be with them on the same level."

His only previous win in 33 matches against a top 10 player was in 2012 at Indian Wells, when he beat No. 5 David Ferrer.

Djokovic had won five of the previous six Australian Open championships, and had reached the fourth round or better every year since 2007 - the year before he won his first Grand Slam title at Melbourne Park.

The last time he'd failed to advance beyond the second round at a major was at Wimbledon in 2008, when he was seeded third and lost to then No. 75-ranked Marat Safin, a two-time Grand Slam champion.

Rod Laver Arena was not entirely full, with at least one-fifth of the 15,000 seats empty by the fifth set.

Djokovic's usually vocal Serbian fans were also not a presence, with the exception of a couple women waving Serbian flags. Much of the crowd, sensing an upset, was behind Istomin in the fifth set, yelling "Come on Denis!"

When Istomin made a backhand winner down the line to break Djokovic to go up 3-2, he let out a roar and the audience stood and roared, too.

Djokovic, meanwhile, looked relatively subdued as the set wore on, hanging his head in between points and walking slowly behind the baseline to prepare to receive serve.

When Djokovic's last ball floated long, the crowd leapt up and cheered as Istomin thrust his arms into the air.

"First of all, I feel sorry for Novak. I was playing so good today," Istomin said. "I surprised myself, as well."

The 30-year-old Istomin will play No. 30 Pablo Carreno Busta. Asked what he'd take out of the match, Djokovic said he'd take his bags and go home.

Third-seeded Milos Raonic extended his streak of reaching the third round at all seven Australian Opens he's contest with a 6-3, 6-4, 7-6 (4) over Gilles Muller, the 33-year-old Luxembourg player who won his first title at tour level last week in Sydney.

Raonic, who reached the semifinals here last year and the final at Wimbledon, said he was feeling the effects of a cold and sore throat but still fired 21 aces, hit 56 winners and only had 15 unforced errors. He next faces No. 25 Gilles Simon.

On the women's side, U.S. Open finalist Karolina Pliskova and No. 9 Johanna Konta carried their winning form from warmup tournaments into the third round.

"It's always good to be in the zone," said fifth-seeded Pliskova. "It can always be a bit better."

Sydney International winner Konta, who made a surprising run to the semifinals in her debut Australian Open last year, advanced 6-4, 6-2 over Naomi Osaka and will next play former No. 1-ranked Caroline Wozniacki.

Andy Murray, who replaced Djokovic at No. 1 in the rankings late last year and has been a five-time Australian Open runnerup, returned to the practice court for an afternoon hitting session.

Murray twisted his ankle and tumbled to the court during his second-round win Wednesday night.