Mumbai Open to start from Saturday 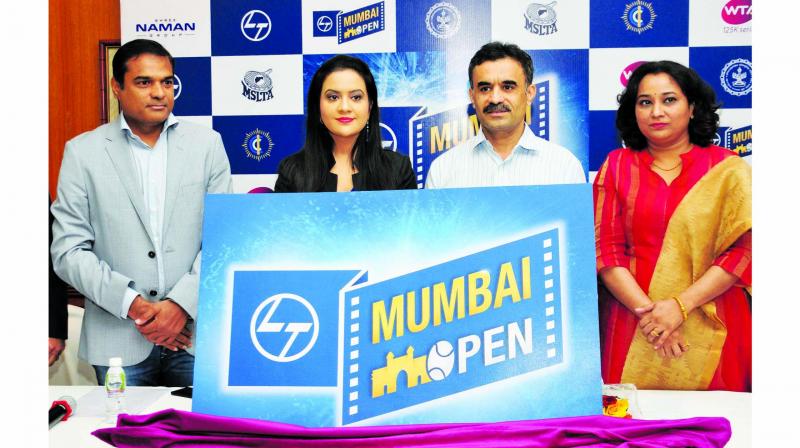 Mrs Fadnavis, chairperson of the organising body, hopes it will be a yearly affair. (Photo: Debashish Dey)

International tennis will return to the city when Cricket Club of India will host the WTA $125K Series L&T Mumbai Open from November 18 to 26. CCI hosted an ATP Tour tournament, Kingfisher Airlines Tennis Open at its tennis courts in 2006 and 2007. Now after 10 years the club in South Mumbai is organising an international tournament.

The tournament will be organised by Maharashtra State Lawn Tennis Association (MSLTA) in association with the Government of Maharashtra. The qualifying draw begins on November 18, for which wild cards will be offered to upcoming young Indian players. India last hosted a WTA event — the Royal Indian Open — way back in 2012 in Pune.

“Indian girls are progressing in women’s tennis rankings and this tournament would provide them a much-needed platform to take them to the next stage,” said Amruta Fadnavis, chairperson of the organising committee.

Amruta, who is the wife of Maharashtra chief minister Devendra Fadnavis, was also Chief Patron of the Davis Cup tie between India and New Zealand that was hosted successfully at Balewadi Sports Complex in Pune and was awarded the best R&R award for being the best-organised event amongst 26 ties across the globe.

A banker by profession, Amruta has been considered instrumental in bringing government support for the tournament and bringing corporates on board to conduct the prestigious event in Mumbai.

“We want to make it an yearly affair. Sponsors want to be associated with for a long haul but as of now their commitment is for this year only,” Amruta added.

Current World No 78 Aryna Sabalenka and former World No 2 Vera Zvonareva are some of the notable entrants for the event. Four wild cards for main draw will be issued to Indian women’s players. Top ranked Indian in WTA rankings Ankita Raina (281), Karman Kaur Thandi (312), State No 1 Rutuja Bhosale of Pune and World junior No 18 Zeel Desai are amongst the front-runners for main draw wild cards.

“There is a big gap after Sania Mirza. Ankita Raina and Thandi are doing well. There are 3-4 more girls chasing them but realistically they will need another 3-4 years to get into the main draw of WTA events on their own. Here they get to play in their own conditions and an opportunity to win some points and close the gap,” MSLTA secretary Sunder Iyer said. The winner of the event will get USD 20,000 and 160 WTA points.

CCI Tennis courts hosted its first international tennis fixture in 1963, a Davis Cup tie when India lost to the United States of America. It then hosted a Davis Cup match 43 years later in April 2006, an Asia-Oceania second round Group I tie where India beat Pakistan.

The CCI tennis courts have been refurbished for the event. “We have upgraded the courts. Lighting is new, surface has been re-laid, drainage system has improved and we are ready to stage this tournament. We last hosted an ATP tournament and now we are happy to host WTA event. I hope it would be a great event.” Kekoo Nicholson, president of CCI, said.

Pune is currently hosting the $50K ATP Challenger and will host the ATP World Tour event, Maharashtra Open, in January. It just hosted a $25,000 ITF Women’s championship and $15,000 tournaments are lined up for MSLTA later this year.