Rutuja Bhosale has been stunning tennis circuits with her brilliant performance. 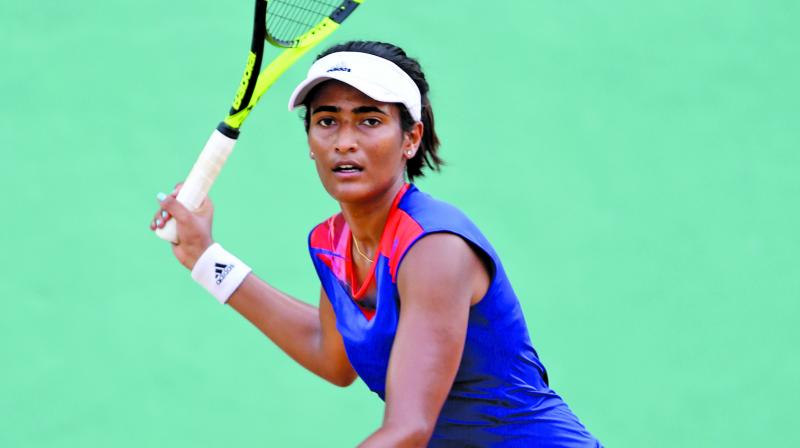 Rutuja Bhosale was creating waves at the junior tennis circuit in India until she decided to pursue higher studies in the United States. At 15, Rutuja became the youngest state level tennis player ever to win the senior national tennis championship. Ratnika Batra was the youngest ever to have won the national title in 2008 at the age of 14. Rutuja was now the second youngest in the country.

Making her debut with the India Fed Cup team in 2012 , she achieved her highest junior rank of world number 55. She also participated in the Australian Open junior singles and reached the doubles semi-finals in the same event.

Hailing from Shrirampur, a place that has produced a cricketing star like Zaheer Khan, the 21-year-old Rujuta is now back from the US after completing her graduation. The tennis player now plans to play in India and aims to roll back her junior years at the senior circuit.

Rutuja also played for Texas A&M in the US College tennis and got a wild card during her comeback as a professional in the $15,000 Endurance Aurangabad Open Women ITF Championships recently. She repaid the faith of the organisers by winning the first single title in India after a gap of five years on Sunday. She defeated 16-year-old Mahak Jain in the final 6-4,6-4 in one hour 24 minutes. Rutuja made 12 WTA points and $2352 for her efforts and will find herself ranked at around 940 on the WTA ranking next week.

Rutuja also made it to the doubles finals of the same event while partnering with Kanika Vaidya. However, the pair lost to Pranjala Yadlapalli and Xiaoxi Zhao (China) 6-2, 3-6, 4-10.

The strong built, right-handed player with diminutive forehand feels she has improved as a player and has greater self-belief.

“I had got a scholarship for tennis and education, so I went to the US and studied there for five years. There I got the opportunity to play in five Pro tournaments, but due to a busy academic schedule, I couldn’t participate in all of them. I am back and will play my tennis in India,” she said reasoning about the fall in her rankings.

The win in Aurangabad has given her confidence. “It was good to win a tournament on a comeback in India. I have improved as a player after playing in the US. Earlier, I was shy on the court doubting myself even when I was leading by a set. But now even if I am trailing I know I have the ability to fight back and win from any situation,” she said.

She is now ready to travel the distance to better her rankings and play as many tournaments as she can.

“Earlier, I was dependent on my forehand. Now I have improved my backhand and can attack from both ends. I serve bigger though my second serve is still under process,” Rujuta added.

“I am looking to play tournaments in Egypt and Thailand shortly. I have already started practising and will later train in Spain, as it is the monsoons here. By December I want to improve my rankings to get in the top 500. I am pretty tall but lean at the moment, so I want to develop my muscles and be stronger,” she said.

Profile
Rutuja Bhosale started playing tennis at the age of nine at the Deccan Gymkhana in Pune with coach Sandeep Kirtane. At the age of 12, she decided to turn professional. She achieved a career-high singles ranking of 527 in December 2012.  She idolises Venus Williams. She was a member of the MSLTA’s (Maharashtra State Lawn Tennis Association) Vision Programme, which aims to promote players from the state in the Grand Slam.