All the fourth-round contenders will be in action at the All England Club on a day that promises an unmatched concentration of excellence. 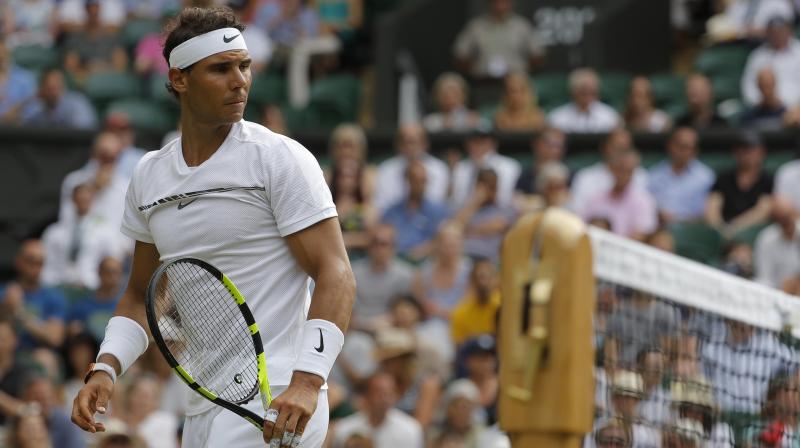 Spain's Rafa Nadal has arguably looked the most impressive of the famed quartet at the pinnacle of the men's rankings. (Photo: AP)

London:  The "Big Four" of men's tennis have made it into the second week of Wimbledon unscathed and largely untroubled while the women's draw remains wide open, but "Manic Monday" could offer major clues as to the destination of this year's titles.

After a day of rest, all the fourth-round contenders will be in action at the All England Club on a day that promises an unmatched concentration of excellence.

Spain's Rafa Nadal has arguably looked the most impressive of the famed quartet at the pinnacle of the men's rankings.

The 31-year-old won this year's French Open without dropping a set and he has kept up that run here - meaning he has now won 28 consecutive sets at the grand slams this year.

But Nadal, Wimbledon winner in 2008 and 2010, is up against a tricky opponent in Luxembourg's left-handed serve and volley specialist Gilles Muller, who beat him in the second round in 2005 - the Spaniard's first loss at the tournament.

"He's one of the toughest opponents possible on this surface especially, this is his best surface without a doubt. He has a great serve, a great volley. He plays well from the baseline here. He is a tough, tough opponent," Nadal said.

Roger Federer, seven-times Wimbledon winner, has yet to be truly stretched but Bulgarian Grigor Dimitrov should give observers some clues as to just how sharp the Swiss's form is.

"He's in the prime of his career you would think right now. I expect that every time I have played him he has become better. I expect the same on Monday," Federer said.

Defending champion and home favourite Andy Murray is up against Benoit Paire, the tall bearded Frenchman who seems to have finally come to terms with playing on grass.

Three-times Wimbledon champion Novak Djokovic also faces a French opponent in the shape of Adrian Mannarino. For the second successive match, 37-year-old American Venus Williams will play an opponent who was not even born when she made her Wimbledon debut.

Croatian Ana Konjuh, at 19 the youngest player left in the draw, made many sit up and take notice with her three-set win over eighth seed Dominika Cibulkova in the third round.

Britain's Johanna Konta has won plenty of praise for the focused, business-like manner in which she has advanced to the last 16 and she will face an opponent who knows all about dealing with high expectations - France's Caroline Garcia, once tipped by Nadal to be world number one.

Current world number one Angelique Kerber will have to refind her form after a poor clay season if she is to get past confident Spaniard Garbine Muguruza.

Simona Halep of Romania could unseat Kerber at the top of the rankings but she has the imposing presence of Victoria Azarenka, quickly back in form after her maternity leave, standing between her and a place in the quarter-finals.