Daniil Medvedev after facing Nadal: 'Very tough to play against you'

The 23-year-old Russian fifth seed gave a massive scare to Nadal as he shifted styles and won the next two sets after losing the first two. 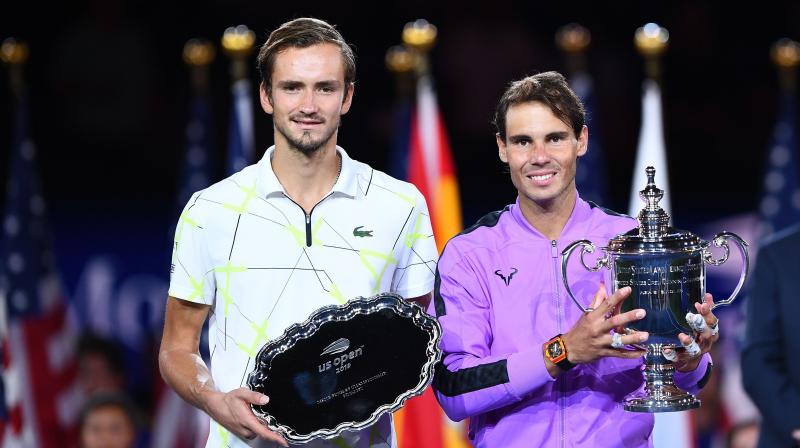 'The way you are playing is a big joke. It is very tough to play against you,' US Open's official website quoted Medvedev as saying. (Photo: AFP)

New York: After losing a five-set thriller in the US Open final against Rafael Nadal, Russia's Daniil Medvedev congratulated the Spaniard on his 19th Grand Slam win and said that playing against the player is very tough.

"The way you are playing is a big joke. It is very tough to play against you," US Open's official website quoted Medvedev as saying.

Now he is just one Grand Slam win away from equaling the record of Swiss Roger Federer for winning the most number of Grand Slam titles.

"It has been an amazing final. It seems that I had, more or less, the match under control," Nadal said.

Nadal was the favourite to win the final and started off with comfortable victories in the first two sets.

However, Medvedev, aiming to win his maiden US Open title, gave a tough fight to the 33-year-old Spaniard to set the game beautifully.

The 23-year-old Russian fifth seed gave a massive scare to Nadal as he shifted styles and won the next two sets in the enthralling match. With the fourth set tied, there was a chance for Medvedev to create an upset and repeat yesterday's script where Canada's teen sensation Bianca Andreescu shocked US' tennis ace, Serena Williams.

However, in the fifth set, Nadal, with his resilient attitude, continued his natural attacking game and finally overcame the obstacle to breeze away to his fourth US Open crown.