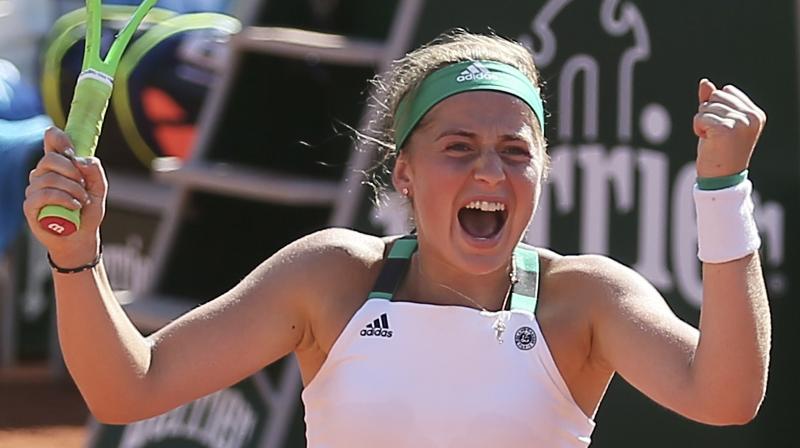 Jelena Ostapenko is yet to win a World Tour title. (Photo: AP)

Paris: Jelena Ostapenko became the first unseeded women's finalist at the French Open in more than 30 years by beating Timea Bacsinszky on Thursday.

The 47th-ranked Ostapenko, the first Latvian player to reach a Grand Slam final, will play No. 3 Simona Halep, who beat second-seeded Karolina Pliskova.

The last unseeded player to reach the final at Roland Garros was Mima Jausovec, who lost to seven-time French Open champion Chris Evert in 1983.

Ostapenko won 7-6 (4), 3-6, 6-3, sealing the win on her second match point with a forehand winner to break Bacsinszky's serve for the fourth time in the set. It was her 50th winner of the match, which also saw her make 45 errors.

The Latvian turned 20 on Thursday and Marion Bartoli led the Court Philippe Chatrier crowd in singing "Happy Birthday," in French, to Ostapenko moments after her victory.

"I'm really happy," Ostapenko said. "I love to play here, I love you guys, you're amazing, thanks for coming to support me. I'm just happy with the way I celebrated my birthday."

Ostapenko is yet to win a World Tour title. The last player to win their debut title at Roland Garros was Gustavo Kuerten, who lifted the title the day the Latvian was born.

Ostapenko's strong forehand made the difference. It was measured at 76 mph (122 kph), faster than the average of top-ranked men's player Andy Murray.

"I was always playing aggressive and trying to hit the ball when I have the chance," Ostapenko said. "It probably helped me to win today."

Thursday was also Bacsinszky's birthday, her 28th. It is the second time in three years she has lost in the French Open semifinals.

Bacsinszky received treatment on her right knee shortly after dropping serve in the seventh game of the contest. But that did not seem to trouble the Swiss player too much as she broke straight back.

Ostapenko had never been past the third round at a major until this week but she didn't let the occasion faze her as she took the first set on a tiebreaker.

Ostapenko then broke early in the second set but Bacsinszky won the last four games and levelled the match when her opponent double faulted.

Both players struggled on their serve in the final set, which had six of the 16 breaks in the match.

The 25-year-old Halep clinched victory on the first of her two match points when Pliskova, who made 55 unforced errors during the semifinal, sent a return long.

Halep had broken early in the third set and threatened to break again in the fourth game but Pliskova saved with an ace and went on to hold.

Pliskova then broke to level the set but Halep broke straight back to leave the Romanian serving for the match.

Dabrowski, who is from Canada, and her Indian partner fended off two match points on their way to a 2-6, 6-2, 12-10 victory over Anna-Lena Groenefeld of Germany and Robert Farah of Colombia for their first Grand Slam title.