The 37-year-old tennis star easily won the first set and finished with 28 winners to 20 unforced errors. 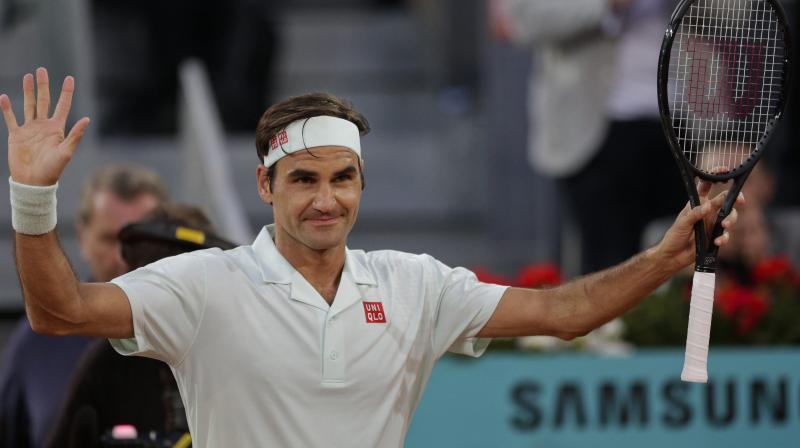 The Swiss player dismantled Gasquet 6-2, 6-3 in a match lasting just 52 minutes and marking his triumphant return to the clay court. (Photo: AP)

Madrid: In his first clay court match in three years, Roger Federer breezed past France's Richard Gasquet in the second round of Madrid Open on Tuesday (local time).

The Swiss player dismantled Gasquet 6-2, 6-3 in a match lasting just 52 minutes and marking his triumphant return to the clay court.

The twenty time Grand Slam winner who was marking his return on clay since 2016 and who was playing for the first time since claiming his 101st ATP singles title at the Miami Open in March, displayed no sign of rustiness.

"I'm very happy to be back on clay. Super happy to be back here in Madrid. The crowds and the ovation I got before and after the game were great. It really makes you feel like that was the right choice to come to Madrid, so that felt good. The first game went well. I didn't think Richard was at his best, far off. But from my side, it was a good match," Association of Tennis Professionals (ATP) quoted Federer as saying.

The 37-year-old tennis star easily won the first set and finished with 28 winners to 20 unforced errors.

Gasquet who was playing in his second tour-level match of the year after suffering from a groin injury recovered well in the second set and was able to stretch Federer.

Federer, however, was in no mood to allow the Frenchman to make a comeback and wrapped up the second set 6-3, registering a straight sets win.

"It was nice seeing Gasquet back after so many months being away from the tour with injury. I think for both of us it was a special match being back here in Madrid," Federer said.

"Crowd was great. It's been wonderful. I think, always in Spain, I've been well-received over the last decade or so just because of my rivalry with Rafa and all the other Spanish players, like Ferrer and so forth. So people really know me. They followed my matches closely for so many years. They heard me speak, and they feel like they kind of know me," he added.