Paes and Bhupathi did not enjoy a cordial relationship during their playing days. 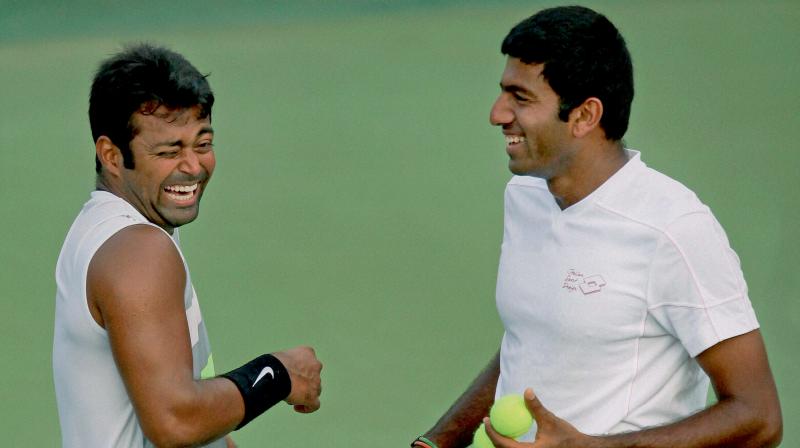 Keeping this in mind, Bhupathi has asked all his players to take a fitness test ahead of the tie. Based on their fitness levels the final four among the six players picked on Monday — Paes, Rohan Bopanna, Ramkumar Ramanathan, Yuki Bhambri, N. Sriram Balaji and Prajnesh Gunneswaran — will be chosen by the captain two weeks ahead of the April 7 to 9 tie.

Bopanna will be making a comeback to the team after missing the Pune tie, while Saketh Myneni and Sumit Nagal, both of whom are recovering from injuries, were omitted from the squad.

“With the current roster of available players for the Davis Cup, I am confident that this is the strongest squad for the tie. My decision on the final competing team for the weekend will be based on their performances over the next three weeks and their fitness levels during the week of the tie,” Bhupathi said after the AITA selection committee meeting, here on Monday.

“I would prefer to play three singles and a doubles but there is no reason it cannot change in next few weeks,” the captain added.

Coach Zeeshan Ali said, “We want to keep our cards as close to our chest as possible. We will be disclosing the final names later and it will be tricky for our opponents.”

Paes and Bhupathi did not enjoy a cordial relationship during their playing days. Bopanna, who is closer to Bhupathi, also has had problems with Paes, most notably ahead of last year’s Rio Olympics when he had initially refused to team up with the veteran doubles star.

Zeeshan however, was confident that the trio will put their differences aside and work in the interest of the national team.

“They have their issues. But whenever in the past they have been called to play for the country, they have come forward. The fact is when it comes to the country there is no lack of commitment from any of them,” he said.

‘Paes, Bopanna best bet for doubles’
Paes and Bopanna had lost when they last played against the Czech Republic in the World Group play-off in 2016, but chief selector S.P. Misra feels they are still the best bet in doubles.

“Bopanna has the highest ranking among all players while Paes is fit with vast experience. Of course they are the best doubles team for the Uzbekistan tie,” Misra said. “If Paes is performing and giving results how can the Aita say if he should play or not?” Misra said.

Misra admitted that Uzbekistan would be hard to beat, but was confident that India would give a good account of themselves under Bhupathi’s guidance.

“He has plenty of experience of winning Grand SlamsMahesh has recently stopped playing. A lot of the opponents our players will face are those who Mahesh has played in the past. That is a huge advantage.”