Talking through their racket

She came as eighth seed here but lost first round match to Sabina Sharipova in a three setter. 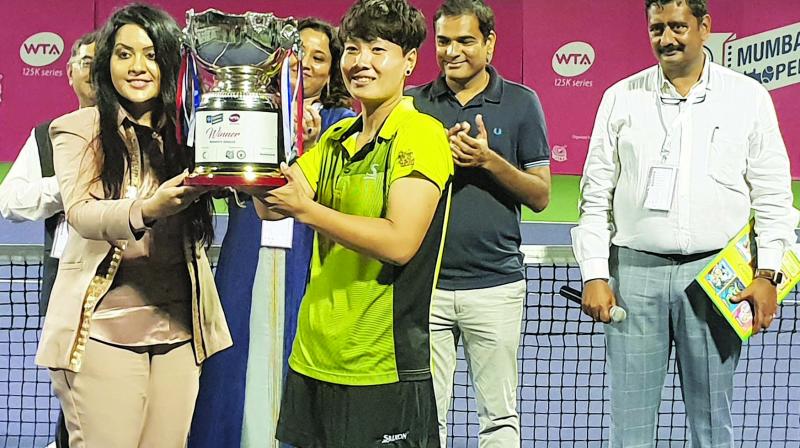 Natela Dzalamidze and her partner Veronika Kudermetova, seeded third, won the doubles title with a 6-4, 7-6 (4) victory over the fourth-seeded pair of Bibiane Schoofs and Barbora Stefkova.

Irina Khromacheva was the most vocal player at the Cricket Club of India courts at L&T WTA Mumbai Open 125K Series event last year. She came as eighth seed here but lost first round match to Sabina Sharipova in a three setter.

In that particular game she was vocal and making frequent gestures. She couldn’t hide her emotions in the doubles event as well where she had good run with Slovenian partner Dalila Jakupovic before losing to Victoria. Rodríguez and Bibiane Schoofs in the doubles final.

This year, she came quietly as an unseeded player and made her way to singles final and doubles semi-final without much fuss. Her racket was doing most of the talking and she kept her emotions in check. The left handed Russian kept calm during pressure situations and used clever lobs and drop shots to frustrate her intimidating opponents.

“I am working hard on myself with my coach who takes care of mental aspect as well. I worked hard in the preseason and thankfully it is paying off. Coach keeps telling me to focus on my game and work for these moments, if it’s not today, it will be tomorrow which keeps me going through out the season,” she said.

Irina won in three setters from second round onwards but eventually lost a three setter to fifth seed Luksika Kumkhum on Sunday night. Add to that she had to play singles semi-final and doubles semi-final on Saturday which had left her exhausted for Sunday’s final and she couldn’t sustain the steam after bagging first set and caved in to supreme fitness of her Thai opponent.

Both Khromacheva and Kumkhum showed that skills and fitness can make up for height and power disadvantage by reaching the final.  It was unlike last year, when heavier balls were introduced and players were still comeing to terms with it. Powerful players Aryna Sabalenka and Jakupovic displayed speedy tennis to qualify for final backed up by big serves and strong forehands.

Khromacheva ousted her doubles partner and second seed Jakupovic by responding her fast and powerful play with smart lobs and slowing the pace of the game in semi-final. She had also accounted for more powerful Sharipova and Valentini Grammatikopoulou earlier.

“My game is mixing it when people come hard at me,” said the Russian who had already won WTA 125K Series title this year at the Anning championship in China this May after beating Zheng Saisai in final.

Like Irina, Kumkhum also has average height and doesn’t possess big serves but she made for it with skills, fitness and determination. The Thai World No. 80 jumped 23 places in WTA rankings on Monday after claiming the biggest title of her career at the L&T Mumbai Open on Sunday.

Kumkhum, who made the third round of this year’s Australian Open for her career-best Grand Slam performance, eliminated top seed Saisai and resurgent Russian Margarita Gasparyan to reach final. Her only scare was in the first round itself when she saved a match point against Pranjala Yadlapalli and made a remarkable comeback to stay alive in the title and go onto bag a title.

“I am delighted and hope to make it two very soon. I have to run further since I have a double handed forehand, which is a shorter swing so I am always focusing more on my fitness.”

Natela Dzalamidze and her partner Veronika Kudermetova, seeded third, won the doubles title with a 6-4, 7-6 (4) victory over the fourth-seeded pair of Bibiane Schoofs and Barbora Stefkova.