Wimbledon 2017: Nick Kyrgios pulls out of tournament after retiring hurt in opener 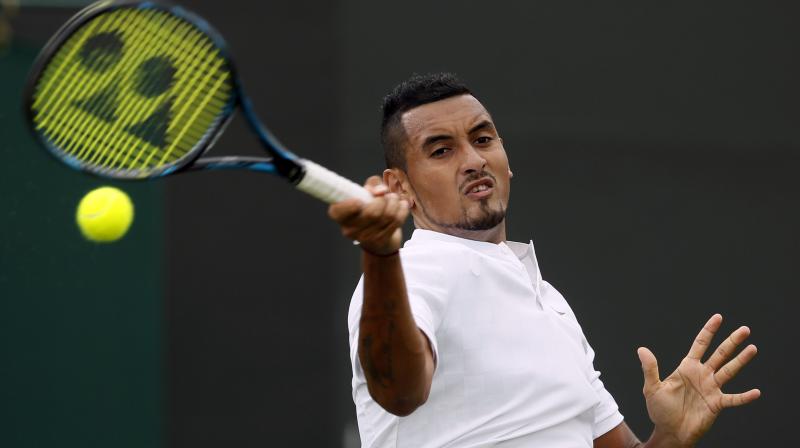 Kyrgios declared he had an ongoing hip problem before the start of Wimbledon (Photo: AP)

London: Nick Kyrgios has retired from his first-round match at Wimbledon after losing the first two sets.

The 20th-seeded Australian was trailing Pierre-Hugues Herbert of France 6-3, 6-4 when he called for a trainer to work on his left hip. He then decided to stop the match.

Kyrgios also retired with an injury from his first-round match at Queen's, a Wimbledon warm-up tournament.

The Duchess of Cambridge has offered praise to Wimbledon's ball boys and ball girls, saying their professionalism makes a huge difference to the players.

The former Kate Middleton made her first visit to the tournament in her capacity as patron of the All England Club. The duchess told two ball girls and a boy that their work "makes the game happen."

After praising their dedication, she also added, "you look so smart." Kate will take her place in the royal box to watch Andy Murray on Centre Court on Monday.

Play is underway on some of the courts at Wimbledon, with two-time semifinalist Jo-Wilfried Tsonga and Nick Kyrgios among the first in action.

Tsonga reached the semifinals at the All England Club in 2011 and 2012. The 12th-seeded Frenchman was playing Cameron Norrie of Britain on Court No. 2.

Kyrgios, an Australian seeded 20th, was up first on Court No. 3 against Pierre-Hugues Herbert of France.

Despite warm temperatures with sun peeking through the clouds, Kyrgios was wearing white tights under his shorts.

Defending champion Andy Murray will be up first on Centre Court at about 1 p.m. against Alexander Bublik.

The 2017 edition of Wimbledon is set to start under a cloudy sky and with a chill in the air. Defending champion and No. 1-seeded Andy Murray will play in the first match at Centre Court on Monday, facing Alexander Bublik.

First up on No. 1 Court will be Venus Williams, a five-time champion who faces Elise Mertens.

This is Williams' first match since she was involved in a car accident in Florida on June. The American is being sued by the estate of a man who died about two weeks after the crash that police say Williams caused.

Other major title winners on the Day 1 schedule include Rafael Nadal, Stan Wawrinka and Petra Kvitova. The temperature is in the 60s (teens Celsius) about an hour before play begins.