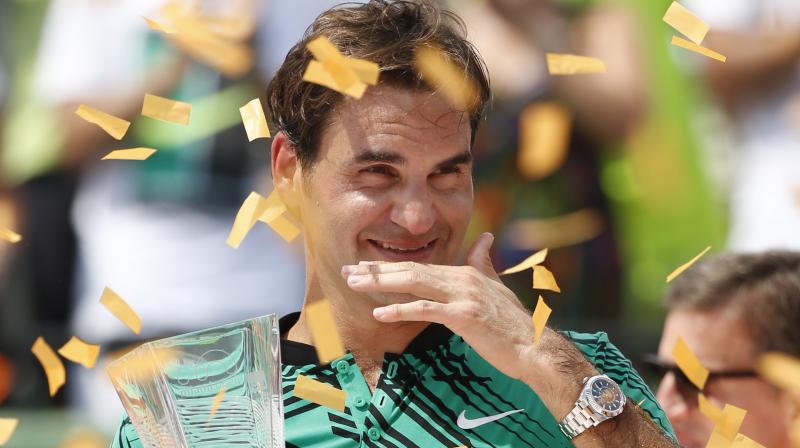 Federer, peerless this year after returning from a six-month injury absence, broke once in each set for his fourth consecutive victory over Nadal, though the Spaniard still leads their career head-to-head record at 23-14, due entirely to his superiority on clay.

The 35-year-old Swiss, showing no sign of losing his edge, improved to 19-1 this year, winning the Australian Open in five sets over Nadal, and BNP Paribas Open in straight sets over fellow Swiss Stan Wawrinka.

His only loss was at the hands of Russian Evgeny Donskoy in the second round in Dubai.

“What a start to the year. I can’t believe it. For me the dream continues,” said Federer, who still has a ways to go to match his career-best 35-1 start in 2005.

“Every three years I am here in this position but always with the smaller trophy,” he observed. “Hopefully I will not have to wait three more years to be in that position fighting again for a title.

“I have to say congratulations to Roger. Amazing start of the season, one of the best comebacks on the tour ever after a long injury.”

Fourth seed Federer, in his 24th career final against Nadal, started slowly, struggling to hold serve in the very first game, but he staved off two break points and settled into a good serving rhythm.

Fifth seed Nadal had his moments but had far greater trouble holding serve than Federer, who would have won more easily had he converted more than two of the nine break point opportunities.

“It was a very intense first set,” Federer said.

“It could have gone either way really and then the second set started slow from both sides. Eventually I got a few important (points) and played the right way like I have so many times this year," the Swiss said.

“We’ve had some epic matches over the years,” Federer said to Nadal at the victory presentation.