India’s hopes would rest on Ramakumar Ramanathan, who made the quarter-finals here last year. 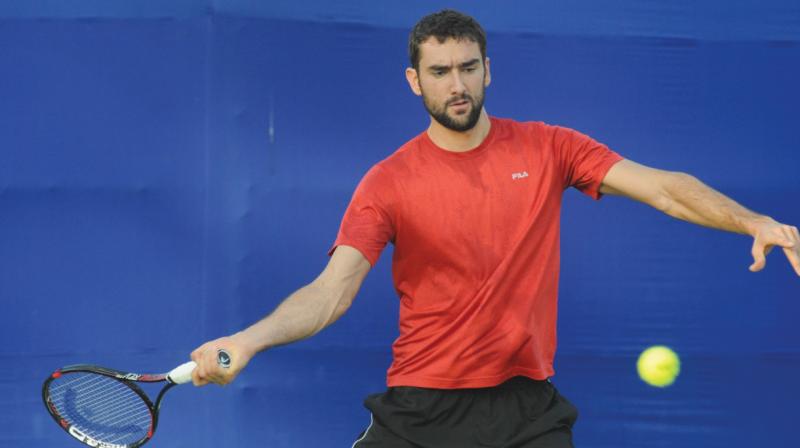 Croatia’s Marin Cilic at a practice session ahead of the ATP Chennai Open at the SDAT Tennis Stadium.

Chennai: The last two Decembers had been eventful for Chennai. If the city was at the receiving end of unprecedented floods in 2015, cyclone Vardah left its devastating imprint in 2016. But Chennai, as it always does, is up again on time to keep its date with one of the season openers for professional tennis players.

Twenty-eight players will start their week-long battle at the Chennai Open 2017, which is all set to roll from Monday. Simultaneous ATP events in Brisbane and Doha may see bigger names in action but the Chennai Open still remains relevant for players ahead of the Australian Open, the season’s first grand slam.

Croatian Marin Cilic, the US Open winner in 2014, headlines the field, which has six players in the top 50. The top four seeds get a bye to the next round. In the absence of defending champion Stan Wawrinka, a four-time winner here, Cilic is the overwhelming favourite to take away 250 points from the Tamil Nadu capital. The top seed would, however, be wary of putting champagne on ice because the tournament has proved to be a graveyard to many a star.

The smart money would be on Cilic because he has reached the pinnacle twice here. He would face the winner of the match between Portugal’s Gastao Elias and a qualifier in the round of 16. Last year’s losing finalist and Cilic’s compatriot Borna Coric would also fancy his chances. The 20-year-old, who has already troubled top players such as Rafael Nadal and Andy Murray, would be keen to add Cilic to his list of scalps.

India’s hopes would rest on Ramakumar Ramanathan, who made the quarter-finals here last year. The local player will face Yuki Bhambri in the first round. Ramkumar is in the same quarter as Frenchman Benoit Paire, whose first round opponent is Konstantin Kravchuk. For Saketh Myneni, the top ranked Indian at 192, it would not be walk in the park as he is set to face veteran Mikhail Youzhny, a champion here in 2008.

The most entertaining clash of the first round will be between Aljas Bedene and Guillermo Garcia Lopez, with the winner getting a chance to meet Martin Klizan.

Leander Paes and Andre Sa of Brazil should have no problem to move to the quarter-finals in doubles as they face the Indian pair of Purav Raja and Divij Sharan. USA’s Scott Lipsky and Jonathan Elrich of Israeli are the top seeds. Wild card entrants Ramakumar and Saketh will meet Benoit Paire and Steve Darcis. It’s going to be a challenge for the Indians as Paire was a doubles champion here in 2013.