The coach also stressed on the need to not overdo it. “Hamstring conditioning is very important before you use it. 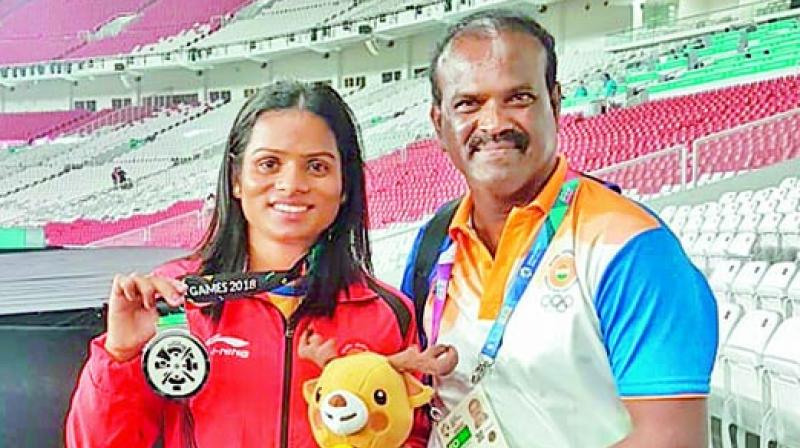 Dutee Chand poses with her coach N. Ramesh after winning her second silver at Asian Games.

Jakarta: Disadvantaged by her short height, Dutee Chand makes up for it with her quick strides, says her coach N. Ramesh, who also credited a gruelling speed rubber training regimen for her two silver medals at the Asian Games here.

The 5-foot-3-inch sprinter from Odisha picked up second position in 100m and 200m events, her 100m silver being India’s first in 20 years.

The triumph on the track healed some of the psychological wounds she suffered while fighting for identity in the hyperandrogenism case at the Court of Arbitration for Sports.

“Her start is natural, she has got very good frequency (of steps), so we worked hard on the first 30-40 metres. This season, I asked Dutee to practice with the speed rubber to enhance speed,” Ramesh said.

The regimen involves wearing a band just above the knees to increase resistance while performing training drills and workouts.

The drill is believed to enhance muscle power and agility which in turn helps the sprinter accelerate. “If you do it regularly, it helps you run with the same intensity in the competition, Ramesh said.

“It’s not easy to maintain balance when you run with rubber tied to your body. It is a very technical training. First you perform drills, then easy running and then high speed,” he explained.

Dutee started practicing with the rubber after the Guwahati Nationals in June this year. “Before she started using rubber, she would cover 40 metres in 4.95 seconds and after using it it came to 4.80s. In sprints like 100m, time is crucial,” said Ramesh.

The coach also stressed on the need to not overdo it. “Hamstring conditioning is very important before you use it.

“The warm up is very crucial. The athlete should also be intelligent enough to endure and manage the pressure,” he said.

Ramesh is proud of his ward who, he said, has immense fighting spirit as she fought alone and never thought of giving up.

“When India’s 100m history sheets will be looked at, it will show that before her medal, there was just one silver and two bronze in 17 editions since 1951 (It is actually two silvers and a bronze). This medal has come after 20 years. Full credit to Dutee, she fought on the track and in her life too,” the coach said.