In the second Match of the evening, U Mumba beat Jaipur Pink Panthers 36-32 to finish their home leg with a victory. 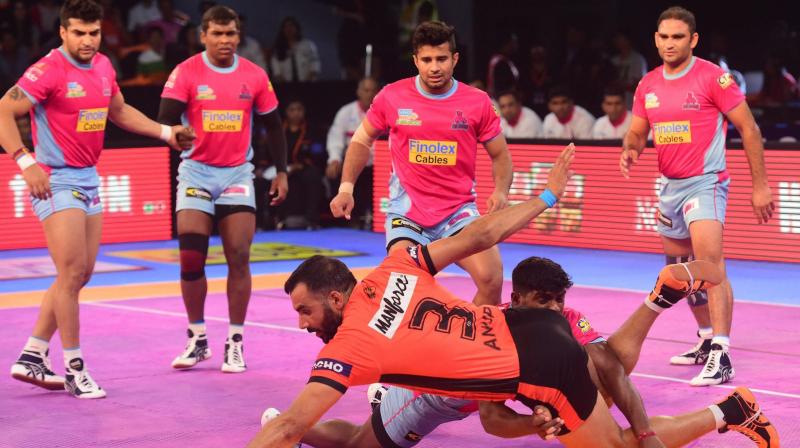 U Mumba and Jaipur Pink Panthers players in action during their Pro Kabaddi League match in Mumbai on Thursday. (Photo: PTI)

Mumbai: U Mumba and  Telugu Titans finished their Mumbai leg with victories. Telugu Titans beat Tamil Thalaivas 32-28 in the first game, while U Mumba edged out Jaipur Pink Panthers 36-32 in the Pro Kabaddi League (PKL), which was played at NSCI Dome on Thursday.

In the first contest, Telugu Titans defence dished out a fabulous performance to  win the south derby against Tamil Thalaivas Sombir led the charge for Telegu Titans with 10 points, while Nilesh Salunkhe scored five points. For Tamil Thalaivas Ajay Thakur led the charge with  8 points with defender Darshan picking up 4 points. Prapanjan was yet another key player who picked up 4 points in the raiding department but the trio was unable to stop Thalaivas from losing the match.

With team co-owner Sachin Tendulkar in the stands along with his son Arjun and daughter Sara cheering for the side, Tamil Thalaivas set the tone early as K Prapanjan picked up quick points to hand his team an early advantage in the first half. But Telegu Titans made a strong comeback with defence stepping up as their star raider Rahul Chaudhari failed to make an impact in the first half as Tamil Thalaivas defence kept him on the bench with out giving him much point.

It was a neck to neck affair in with scoreline ending 12-9 in favour of Telegu Titans. In the second half, it was Titans kept the pressure on Thalaivas and in the 24th minute, they inflicted the first all out of the match on Thalaivas to open up 5 point gap.

Tamil Thalivas though turned the tables on Titans and with captain Ajay Thakur and Prapanjan picking points to try and narrow the deficit. In the 38th minute they inflicted all out on Titans to cut down the deficit to two points but in the end, Titans proved to be too strong as they held on to their lead and picked up the victory.

In the second Match of the evening, U Mumba beat Jaipur Pink Panthers 36-32 to finish their home leg with a victory. Kashiling Adake scored 10 Points and Anup Kumar scored six points to lead their team to victory. This was U Mumba's fourth victory of the season and they now have 24 points from ten games.

Meanwhile, Jaipur Pink Panthers crashed to their second defeat of the season and have 22 points from six games. It was a close game for the first 10 minutes as both teams were tied at 6-6. Jaipur Pink Panthers inflicted an all out on U Mumba in the 16th minute leading 14-9. U Mumba came back strong in the end but Jaipur managed to hold their nerves to take a 16-15 lead in the first half.

In the second half, U Mumba came back strong but Jaipur continued to be relentless in the second half. U Mumba tried to make a comeback in the last nine minutes as they inflicted an all out in the 31st minute to take a 23-18 lead. Jasvir Singh once again forced an all out on Mumba in the 39th minute to bring down the score 30-32.

Jasvir equalled the score for Jaipur when he got a touch on Surinder, Anup Kumar also got out in the other end as he went for the pursuit. In the dying minutes, Kashi got two points to increase the lead for U Mumba. Jasvir Singh once tried to get some points for Pink Panthers but was well blocked by Surinder Singh. In the end, U Mumba managed to hold onto three point win and finish their home leg with a win