Opinions will also be sought from a few senior men’s team players, who have been called to Delhi for the meeting. 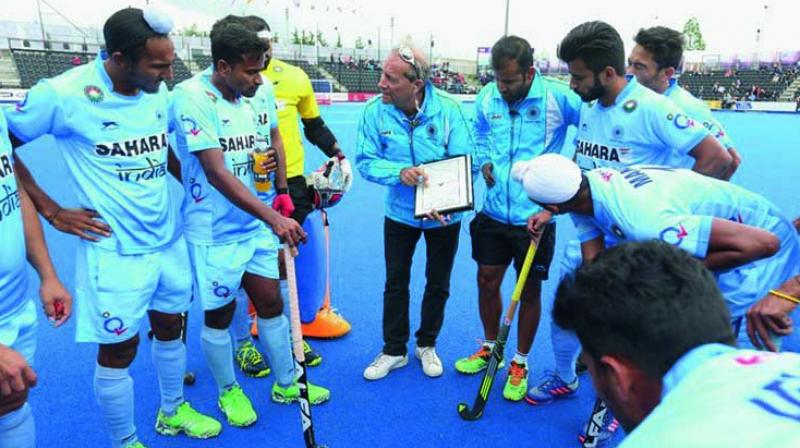 Roelant Oltmans’ took over as India’s head coach in 2015.

New Delhi: Will Roelant Oltmans continue as Indian hockey coach till the 2020 Tokyo Olympics? This and many more questions are on the agenda as Hockey India officials meet here, over the course of next three days to assess India’s progress and along with it those of the coach and the players too.

In what will decide the roadmap for Indian hockey team who have a crucial year ahead with the 2018 Commonwealth Games and the Asian Games followed by the World Cup at home, high performance director David John has called for a review meeting to assess every aspect.

Of those, Oltmans’ role as chief coach is on top of the list with many believing that the 62-year-old Dutchman is under intense pressure following inconsistent results and could be replaced in the long run. India’s men, who rose to number six in world rankings and came up with impressive results last year, are now struggling with style and structure and recent losses to lower-ranked teams hasn’t gone down well with the think-tank.

Opinions will also be sought from a few senior men’s team players, who have been called to Delhi for the meeting.

Said an official in the know of things, “A committee has been set up to review things.

“Obviously, we haven’t been getting the results that we want and it is time to assess what is going wrong, especially with the men’s team. The coach’s position is under the scanner.

“In all likelihood, Oltmans will continue till the Asia Cup in October since and changes at this stage could disrupt the team, but tough questions will need to be asked.

“Whether he will continue for long, one cannot say.”

Oltmans has done a reasonable job with the squad in the last two years, but of late the team have struggled under pressure. Inability to change tactics when pressed, lack of alternate plans and complete ditching of game plans under such situations, have been major issues.

Another crucial factor is the clashing thought process of John and Oltmans, who clearly have different ways of functioning.

The recent Europe tour was one such example, where India sent six uncapped players and also included those who were not even part of the national camp. While John was in favour of testing youngsters and finding a bigger pool through the test matches, Oltmans, it is understood, wanted otherwise.

The final team list, it is learnt, did not have Oltmans’ signature on it.