A fervent fourth quarter began, and India needed to convert their shots to stand a chance. 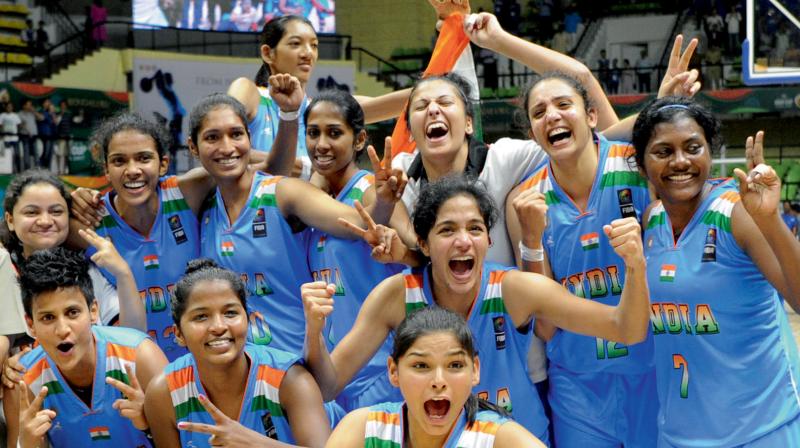 The Indian players celebrate after defeating Kazakhstan in the Division B final of the Fiba Women’s Asia Cup on Saturday. (Photo: R. Samuel)

Bengaluru: In something straight out of a basketball fairytale, a Shireen Limaye jump shot in the dying seconds of the fourth quarter cemented one of India’s finest wins, as they came from behind to edge out  Kazakhstan 75-73 in the Division B final of the Fiba Women’s Asia Cup at the Kanteerava Indoor Stadium on Saturday. The Zoran Visic-coached side will make its return to the upper echelons of Asian basketball, returning to Division A in the 2019 edition for the first time since 2015.

Before the start of the tournament, Visic was prescient in saying that Kazakhstan and Lebanon would be the sides to beat. Indeed, that was the case as India overcame Lebanon in the semi-finals to face a physically fearsome Kazakh team who, just like India, hadn't lost a game in the run-up to the final.

Getting off the blocks in a hurry, Kazakhstan edged out the first quarter 19-16. Nazdezhda Kondrakova was the focal point of Kazakh attacks, using power and precision to dominate the box. PYC Hindu Gymkhana (Pune) forward Limaye (17 points, 10 rebounds, 6 assists) was the countering force for India, as was Jeena Skaria (20 points, 6 rebounds, 4 assists)  — peeling away from markers to score or assist points.

Kazakhstan’s physical prowess became apparent though as they raced to an eight-point lead in the second quarter (39-31). Tamara Yagodkina, Zalina Kurasova and Kondrakova were especially alert on offensive rebounds, beating India to nearly every second ball.

Forward Grima Varghese kept India in touch with some splendid points. India flirted with danger after racking up five team fouls in the third quarter. Between sporadic Indian attacks forced out wide by the Kazakh guards, the side put away 90% of their free throws until this point with the score reading 58-50.

A fervent fourth quarter began, and India needed to convert their shots to stand a chance. Skipper Anitha Paul Durai made it 59-53 with her only three-pointer of the match. The Indian eves defended doggedly, but conceded free throws. The partisan crowd played its role, jeering Kurasova, who missed both throws.

A nine-point flurry put India back in the contest at 58-56. The lead changed hands a couple of times, keeping the tie on a knife edge. With composure being the need of the hour, shooting forward Oxana Ossipenko missed another free-throw, while Limaye romped home a lay-up and the subsequent free-throw from a foul. The game seemed lost when Kondrakova and Ossipenko teamed to make it 71-66. Limaye made a nifty jump-shot, whilst Skaria laid up and netted a free throw to pull level.

Finally, with three seconds left, Limaye nailed a jump shot worthy of winning any match to send the stadium into raptures.

“I’m speechless. Everyone is saying God’s hand is on my head. I’ve been dreaming about this, and doing it in front of home (crowd)  is amazing,” said Limaye.