A solid all-round team performance by Puneri Paltan’s defenders and raiders was the catalyst in their team’s victory. 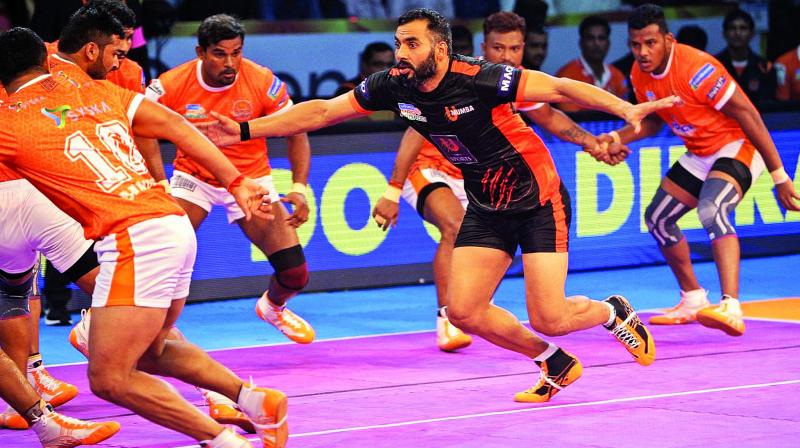 Anup Kumar opened U Mumba’s account with a bonus point in the first minute.

Hyderabad: Puneri Paltan came out all guns blazing as they beat U Mumba 33-21 on the inaugural day of the Vivo Pro Kabaddi League. A solid all-round team performance by Puneri Paltan’s defenders and raiders was the catalyst in their team’s victory. U Mumba captain Anup Kumar scored eight points but it wasn’t enough.

Anup Kumar opened U Mumba’s account with a bonus point in the first minute. But Puneri Paltan showed great intensity to lead 6-1 after seven minutes and reduced U Mumba to just two players. In the 10 th minute Puneri Paltan inflicted the first all out of the match to lead 11-4. Puneri Paltan scored four points with two super tackles in two minutes as they ended the first half leading 17-10.

Puneri Paltan began the second half strongly and such was their dominance that U Mumba failed to score a single point in five minutes. It was a disappointing night for U Mumba as their defenders struggled to come to terms with Pune’s raiders. Puneri Paltan recorded a comprehensive win over their rivals as they won 32-21.