In order to protect expensive equipments, cyclists opt to sleep in cold stadium

Participants prefer to sleep on the ground inside the stadium than be parted from their “way too expensive” cycles and other precious gear. 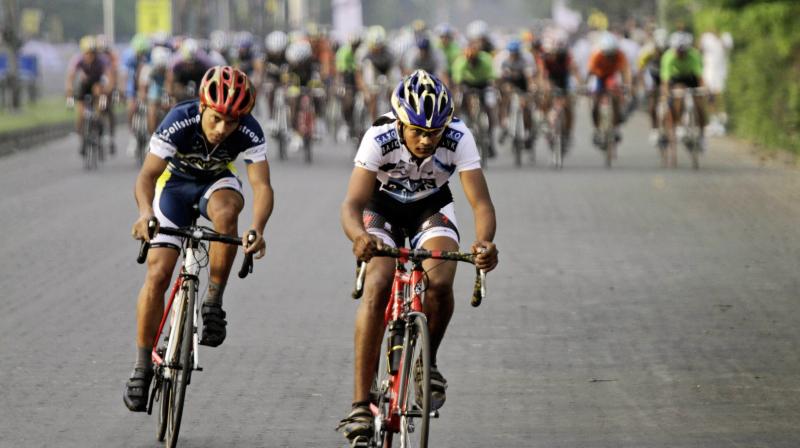 Participants say they would rather sleep, in hardship with a close watch on their gear, than enjoy luxurious sleep in hotel rooms which do not have provisions to allow the cycles inside. (Photo: AP)

Jaipur: Cyclists from various states who have arrived in Jaipur to take part in the National Cycling competition would rather brave the bone-chilling cold and sleep on the ground inside the venue stadium than be parted from their “way too expensive” cycles and other precious gear.

The city is hosting the National Track Cycling Championship from Wednesday after a gap of 15 years and with cutthroat competition expected in the event,  participants say they would rather sleep, in hardship with a close watch on their gear, than enjoy luxurious sleep in hotel rooms which do not have provisions to allow the cycles inside.

Bhagirath, a national gold medalist cyclist from Bikaner said equipment cost anything between Rs 5 lakhs to Rs 9 lakhs and once damaged was difficult to repair.

“We don't want to stay in the hotel as our cycling equipment are very expensive. Once the equipments are damaged, they become non-repairable. This is why riders want their cycles to be kept near them. We opted to stay out of the hotels as our bikes are not allowed inside,” Bhagirath told ANI.

Ritesh Choudhary, organising secretary of the national event said players were aware of the potential career-damaging repercussions of the actions taken by rival cyclists in the heat of the moment could cause.

“There is a cut-throat competition in events like these. In the heat of the moment, opponents can damage other player’s equipments. So cyclists don't want to keep their cycles away as even a small mischief can ruin their careers,” Choudhary said.

“Even if you urge them to shift, they will not. I can say that confidently,” he said.

Organisers claim despite arranging for accommodation to over 600 participants in either hotels or government guest rooms, the cyclists were choosing to stay in rooms near the Velodrome.

The organizing committee said it is also facing problems on how to prevail on the participants to avail of the facilities.

“No other cycling Velodrome is as finely equipped as this one. We have made accommodation arrangements in hotels and government guest rooms but players are not willing to shift as their cycles are too precious for them,” Rajasthan Cycling Association president Sailesh Pediwal said.

The event, which started today, will continue till February 3 with winners being eligible for consideration for international tournaments like Asian Games, Commonwealth Games and Olympics.