Mayure, who started cycling at the age of 10 and was soon winning competitions, has taken up coaching role in his village now. 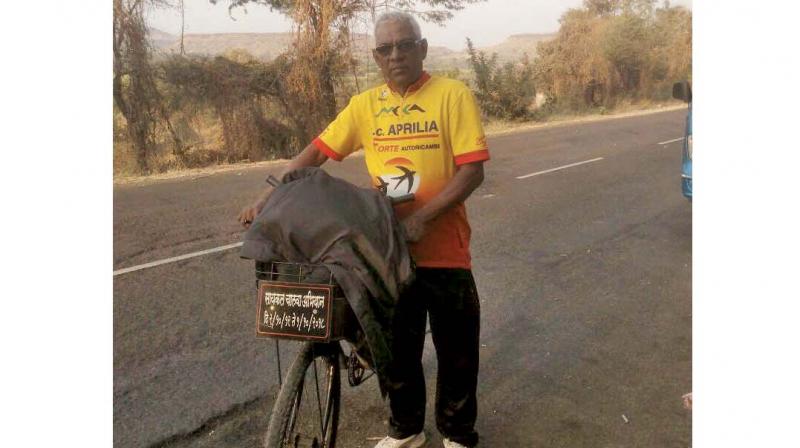 In an era where affordable app-based rental cycles are pushing people to pedal again across the city, a passionate Sanjay Mayure on his cycle has spent around five decades cycling to places. He moves especially to small villages to generate awareness about cycling. The 62-year-old who attended Athens Olympics in 2004 after traveling 1,5000 kilometres on his cycle covering 15 countries, pedaled all the way from his native village Buldhana in Vidarbha, covering over 500 kilometres to attend a cycling conference in Dombivali on Sunday.

The cycling event was organised by Krida Bharti, in association with Dombivali Cycling Association and National Youth Organisation that overseas indoor games in the area. “Maharashtra has about 300 cycling clubs but we don’t have any registered association or federation. We had gathered to work towards forming a registered platform to step up cycling activities across the state,” informed Kamalakar Kshirsagar, joint seceratary, All India Krida Bharti.

“We had called many cyclists, who had been on expeditions across the country, especially in Leh. Mayure was a special invitee, who has inspired many children to take up cycling. We had also an 80-year-old cyclist coming from Sangli and 12 pedaling from Pune to the event,” Kshirsagar added.

Mayure, who started cycling at the age of 10 and was soon winning competitions, has taken up coaching role in his village now. But it doesn’t stop him from traveling places on his simple cycle, to keep his passion going.

“During my travel to Athens, I gained a lot of knowledge about cycling. I witnessed some professional races and wanted to share that knowledge with the kids in small villages across the state. I have been doing that and the response has been good. I came with same purpose to Dombivali and it turned out to be a good event with hundreds of kids participating,” Mayure said.

The veteran cyclist feels that the future of cycling is bright in the state but more needs to be done. “There are many races happening, with good prize money on offer and sponsors are also coming in. But many talented kids leave cycling after growing up as they get busy in making their careers. We have to work on that aspect if we want to produce world class cyclists who can win us medals at the big stage,” he added.