Fitter and stronger the Mumbai racer is preparing for extreme conditions in Austria for selection in final 18. 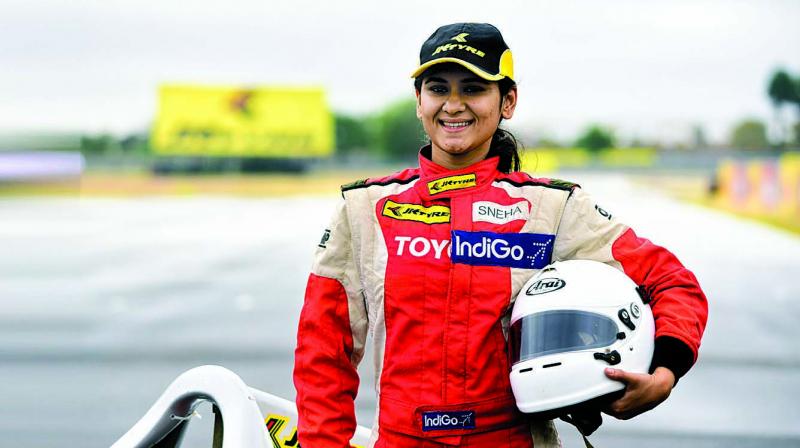 City driver Sneha Sharma who competes in the LGB-4 class, has been invited from a pool of 100 applicants to get a shot at the ambitious W Series next year.

Vadodara based 18-year-old driver Mira Erda is also in the list of 55 elite drivers from 30 different countries to fight for a place in the final grid of 18 in the world’s only all-women racing championship, starting in May 2019. Mira broke the glass ceiling in 2017 when she entered the Euro JK category of India’s premier racing event, the JK Tyre FMSCI National Racing Championship.

The W Series boasts of a total prize fund of $1.5 million, with the overall winner taking home a cool $500,000. It will also take care of travel and subsistence costs of all the drivers, giving a unique opportunity to racers from all economic background.

“I am happy that two of our Indian drivers got selected for this series. It is a matter of pride to go there and compete and making final 18 will be an accomplishment. Getting only to this stage is great, as the trials will be catching eyes of international scouts,” Sneha said on Thursday.

The short listed ladies have two months to prepare for the next step in the selection process — a three-day on-and-off-track trial, including fitness tests, psychometric profiling, as well as multiple driving skill tests. Former F1 stars David Coulthard and Alex Wurz will be among the judges, alongside Dave Ryan, W Series Racing Director.

The final grid will be determined following a series of track tests in the W Series race car — a 2019 Tatuus T-318 — ahead of the season’s first race, at Hockenheim in Germany on May 3. Total six rounds will be held in the season.

“The ratio of women racing all over the world is less. The W Series will provide a platform to increase the ratio and be a pathway to Formula 1. It is a fully sponsored series and for someone like me with no family support in terms of funds it will be great. Even after having sponsors like JKTyre, Indigo you need a lot of funds when ambitions are to drive formula cars regularly at biggest stage. It is an opportunity for drivers to develop themselves under the mentorship of David Coulthard and such people,” she added.

Optimistic of being selected in final 18, Sneha had started preparations well in advance after recovering fully from an injury. She recently competed at the Buddh International Circuit in last round of JK Tyre FMSCI National Racing Championship. She will compete in an event at F1 racetrack in Sepang, Malaysia this weekend. “Idea is to gain as much experience for racing selection in Austria. On track race experience and pressure levels are different,” she said.

A professional pilot, Sneha has shifted to Chennai temporarily after getting promoted as A-320 commander with Indigo airlines. Having juggled between many jobs from young age she is confident to make the final cut with sheer hard work.

“My recovery period made me mentally strong. I lost my mother, she was pillar of support for me, her loss has made me even tougher. I am running on beaches in Chennai regularly, doing cycling, strength training, focusing on good nutrition,” said Sneha who also is a motivational speaker and does many stunt videos.

The passionate racer and pilot has also found time to read specifications and study videos to be fully prepared for the trials.

“I am also reading FIA rules and lot of specifications in W Series racing cars. I am also watching race videos and trying to understand racing conditions in Austria during winter. It will be cold and car behaves different, tyre pressure and engine setting will be altogether different. Performing under pressure will be the key and I think I am strong enough  to soak that pressure. Extra edge should come from over compensation,” she added.