U Mumba pip Patna Pirates in a thriller!

The second half started with Siddharth defaulting giving two points to Patna Pirates by stepping out of bounds during his raid attempt. 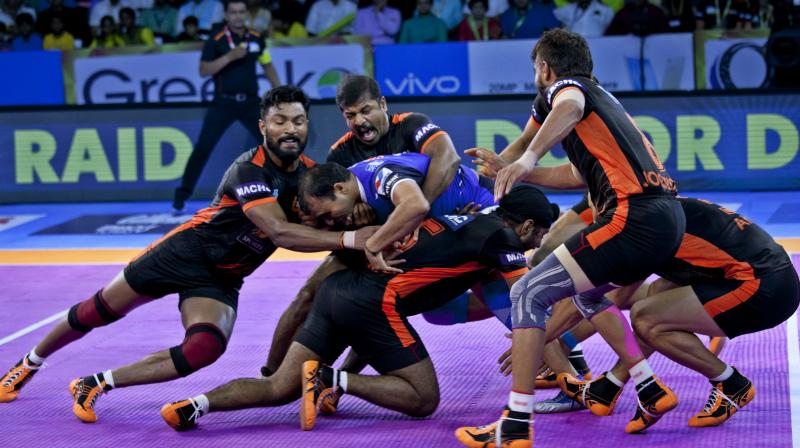 Rohit Baliyan delivered in the second half again by snatching 2 points to take the tally to 38-38. (Photo: AP)

A late rally from U Mumba, which saw all players pulling their weight helped them edge past Patna Pirates 40-39 in a thriller in the Inter-Zone Match of the 6th Vivo PKL in Patna on Saturday.

Solid defending from the trio of Fazel, Surinder and Dharmaraj along with smart raids by Rohit Baliyan ensured U-Mumba stay on top of the game despite their star raider Siddharth being off the court for more than 10 minutes. U-Mumba maintained the lead for the most part of the first half but an all-out inflicted by Patna Pirates in the dying moments helped them level scores at 14-14.

The second half started with Siddharth defaulting giving two points to Patna Pirates by stepping out of bounds during his raid attempt. Soon after Pradeep scored two points for his team giving Patna a three-point lead and enforcing an all-out taking their tally to 25-18. The game was in the balance for a while with both teams picking up quick points. Just when U Mumba was looking to close the gap, a Toofani raid by Vikas ensured Patna scored 3 points and kept their lead intact. Fazel Atrachali got a crucial tackle point by taking down Pradeep Narwal with just under three minutes to go taking the scoreline to 36-37.

Rohit Baliyan delivered in the second half again by snatching 2 points to take the tally to 38-38. In the final seconds of the game Siddharth picked up 1 point and Fazel conceded a point helping U Mumba secure a 40-39 victory over Patna Pirates.