It was a neck-and-neck fight between the leading duo, but the birdie on the 18th hole made the difference. 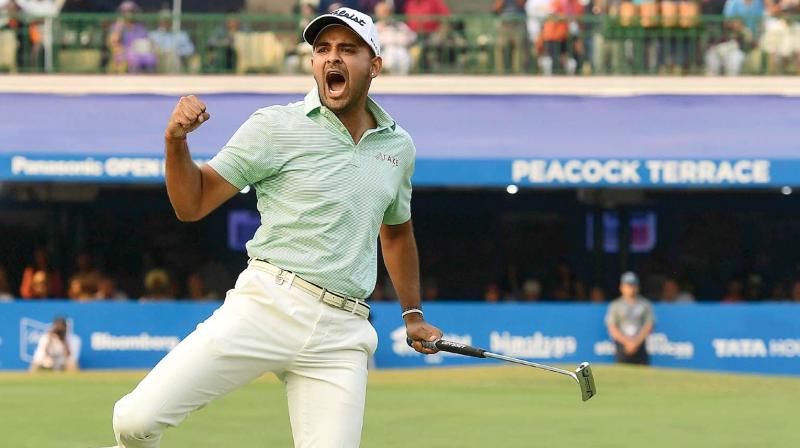 Khalin Joshi celebrates his win at the Panasonic Open in New Delhi on Sunday.

New Delhi: The sparkle of a diamond stud on his left ear complemented the glow on Khalin Joshi’s face after the Indian golfer clinched his maiden Asian Tour title at the Panasonic Open India on Sunday.

After two runner-up finishes at the Asian Tour, it was third time lucky for the Bengaluru golfer, Joshi. He matched the 2017 champion Shiv Kapur’s best winning score of 17-under, en route to the title.

“I have no words, honestly. It’s a huge monkey off my back. I think I played really well…kept my nerves and played really solid coming in.

“The last four holes were the key for me. Like all night I was thinking about the 16th hole tee shot because that tee shot has haunted me for a while now,” Joshi, who became seventh Indian to win the event, said.

Joshi shrugged off early jitters as he struck two early bogeys on first and third but played out four consecutive par rounds before hitting six birdies on Day Four. It was a neck-and-neck fight between the leading duo, but the birdie on the 18th hole made the difference.

“Starting off with two bogeys; I don’t know if it was nerves but just poor decision making I guess. But I still knew that there was a lot of golf to be played. I was playing well and it was just a matter of time.

“The birdie I made on eighth gave me a lot of confidence. I got to keep playing aggressively. That’s all I did. Then again I hit the driver on 18th and I played very aggressive and that’s what paid off,” the winner added.

Delhi expert Siddikur fell short of his title bid after missing a 10-footer birdie putt on the last to settle for a par and a closing 69. He ended the week in second place on his own to mark his best result so far this season.

Kshitij Naveed Kaul, 17, got his pro career off to a great start as he shot 68 in the final round to tie for sixth with Jazz Janewattananond (68) and Matt Stieger (69).