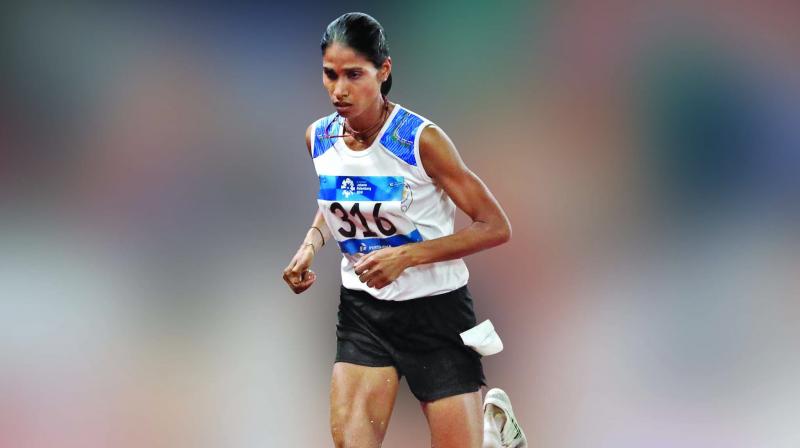 Sudha Singh won the silver in the 3000m steeplechase event on Monday. (Photo:AP)

New Delhi: It was redemption of sorts for the country’s star long distance runner Sudha Singh when she clinched the 3,000m steeplechase silver medal in Jakarta on Monday.

“It was mixed feeling for me after bagging the silver. I was sad for missing the gold but at the same time I was happy that I finished on the podium... but overall I can say it was a satisfactory performance,” Sudha told this newspaper from Jakarta on Tuesday.

The 32-year-old had a gold in her kitty from the 2010 edition in Guangzhou. After being failed to qualify for the 2018 Commonwealth Games, Sudha received flak for the missed chance and she was determined to prove her critics wrong.

“I was written off after the CWG flop and people said that age is catching up with me and it will be difficult for me to clinch the Asian Games medal again... and I am feeling so relieved after proving them wrong,” the Olympian said with big smile.

Though Sudha informed that there was no time for celebration as she is gearing up for the Continental Cup slated to begin at the Czech Republic from September 8.

“I have started my training for the Continental Cup. I will be home for two or three days when I will be back in India on Thursday. I can’t afford to waste time.

“My focus is now to improve my timings as my ultimate aim is to qualify for the 2020 Olympics,” the Arjuna awardee said.

Sudha won a gold medal when women’s 3,000m steeplechase was introduced in the Asian Games in 2010. Sudha has a personal best of 9:26.55, while her season’s best is 9:39.59, which she came up with during the national inter-state championships in June.

Describing her run on Sunday she said, “I was aware within few minutes that gold is not in my reach and I should push for silver and it paid off. The Bahraini athlete is of Kenyan origin and she is very strong.”

Sudha had special training at a high altitude venue in Thimpu, Bhutan, before the Games under coach Surender Singh and that helped her “bounce back”.

“All my hard work paid off. I will continue to train under Surender sir at high altitude for better results. The venue is not decided yet but most probably we will have our camp in Bengaluru or Ooty.”