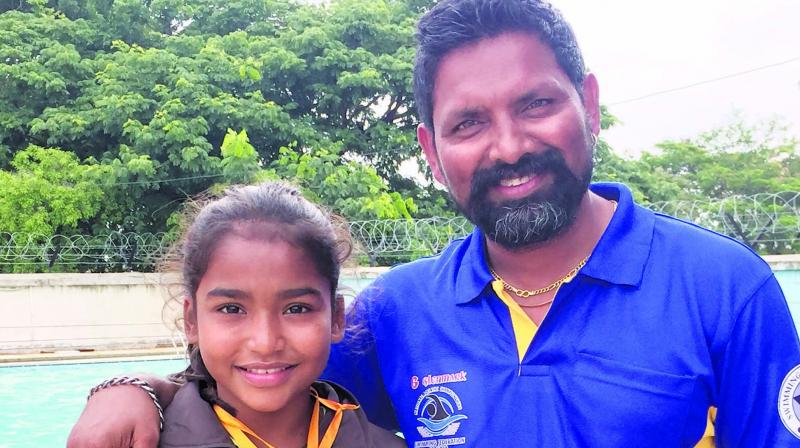 Hrudayee Wagh showing off her medals

Forget a vacation. Her do not even go for movies or eat out at  restaurants so that they can save funds for their daughter’s training. Their daughter, the 13-year old diver, Hrudayee Wagh is equally resolute about following her dreams. Her engineer father  and homemaker mother are committed to helping their daughter fulfill her dream. The teenager, who lives in Kandivali, bagged two gold medals in the Sub-Junior National Aquatic Championship that was held in Pune this week. She improved upon her own record from the previous year, when she had returned with a bronze in the one-meter spring board and high board.

To understand, diving is completely different from swimming. Both sports are aquatic but they are like chalk and cheese. The sport is gravely dangerous at the same time. You have to jump from a spring board into the water while doing flips in the air.

The Olympics sport is not even remotely close to being popular or even well known in the country. Even Wagh was not aware of it initially. Since she is a gymnast, the youngster always jumped into the pool with gravity-defying somersaults and this soon caught the eyes of the diving coaches at the Pransukhlal Mafatlal Swimming Club, she recalls. “I used to swim from a very young age. I was three when my father started taking me swimming with him,” she recollects.

“One day, the coach saw me and he asked if I would like to try diving. I was not scared because I am a gymnast. I fell in love with the sport,” says the poised diver and gymnast.

This was three years ago and soon her long train journeys began. It usually takes an hour from Kandivali to Charni Road, where the institution is. “She comes from school at 1pm, finishes her homework, and then we go to Mafatlal. By the time we come back, it is 10pm,” says her mother Nutan Wagh.

The diving training takes place on weekdays so on the weekends, the teen uses the facilities at Prabhodankar Thackeray in Vile Parle to practice gymnastics. “I write my notes in the train,” says Wagh.

She does not like to boast about her medals either. No one at her school, St Joseph’s, knows about her performance in Pune. “No one even knows about the sport in my school. I have not even told anyone yet,” she says nonchalantly.

The diver and her mother have been partners while commuting in local trains for the last couple of years. Just months before the nationals, Nutan fractured her arm. But she could not let her daughter go alone either for her training. “That was the time when I told Hrudayee that we cannot go for the training. I could not let her go alone as she gets so tired that she falls asleep during the return journey but she is  stubborn. She wanted to go alone. So I accompanied her in the trains for the last couple of months before the nationals,” she says.

Nutan went along with her daughter to the practice sessions but she decided not to travel to take care of herself.

A lot of risk is involved in the sport. Diving legend Greg Louganis had a decorated career in the sport but the first thing that pops up when you search for him on the internet is the blow that he took on his head while attempting a dive in Olympic Games qualifiers in 1988.

“It is difficult (diving) and there is a lot of risk involved as injuries can happen any time. But at the same time, I love it, so I aim to pursue it further,” says the teenager. Besides her trysts with the springboard, Hrudayee  has a colossal love for animals and wants to become a veterinarian. Given her grit, she might just do both in the future.