Running in the inside lane in heat number 3, Dutee lagged behind in the final few metres to finish seventh and 37th overall. 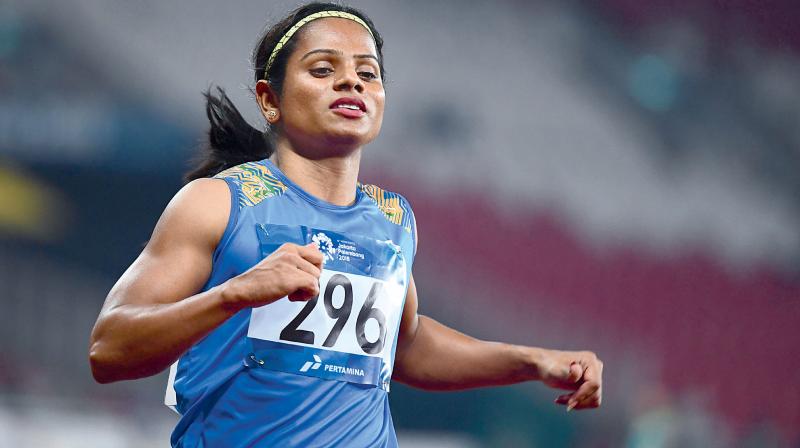 Doha: Indian sprinter Dutee Chand's World Championships campaign ended in disappointment as she clocked 11.48 seconds -- one of her worst timings this season -- in the women's 100m heats here on Saturday.

Running in the inside lane in heat number 3, Dutee lagged behind in the final few metres to finish seventh and 37th overall among 47 competitors to crash out of the championships.

Dutee's timing was in stark contrast with those of the likes of 2012 Olympic champion Shelly-Ann Fraser-Pryce of Jamaica and last edition silver medallist Marie-Josee Ta Lou of Ivory Coast, who led the heat timings with 10.80 and 10.85 seconds respectively.

This showed how much the Indians are lagging behind as compared to the best in the world.

The timing of the last qualifier for the semifinals was 11.31 seconds and it was well within Dutee's reach but she could not do it. The first three in each of the six heats and the next six fastest qualify for the semifinals.

On the same tracks in April during the Asian Championships, the 23-year-old Dutee had clocked 11.28 seconds during the heats and 11.26 seconds (national record) in the semifinals.

But on Saturday, she came up with her third-worst time of the season, after the 11.51 seconds in February and 11.61 seconds in March during the heats in the Federation Cup.

Dutee, the reigning World University Games champion, exited in the heats in the 2017 World Championships. She had clocked 12.07 seconds in the heats in London in the last edition.