Puneri Paltan held on to their nerve as they won 26-24 after producing a terrific second half performance. 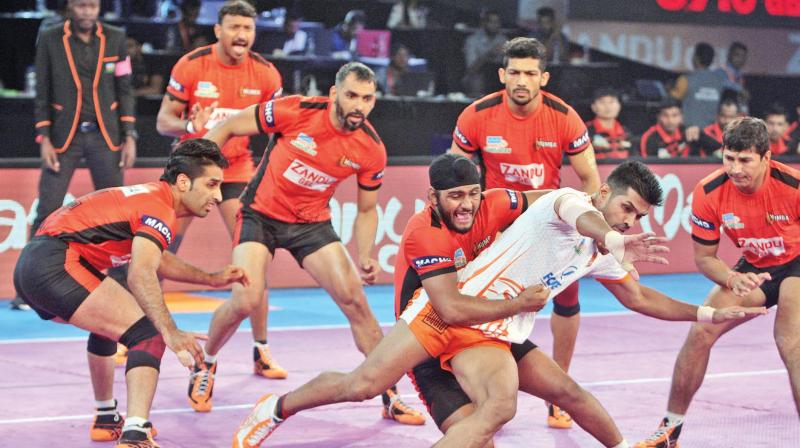 Puneri Paltan and U Mumba in the ring

A terrific second half performance from Puneri Paltan saw them beat U Mumba 26-24. It was a good all-round team effort as Puneri Paltan didn’t choke under pressure at any point of the match. Deepak Niwas Hooda scored seven points for Pune whereas Kashiling Adake scored the same for U Mumba.

U Mumba crashed to the fifth defeat of Vivo Pro Kabaddi League and now have 18 points from eight games. Puneri Paltan have 26 points from seven games.

Deepak Niwas Hooda got Puneri Paltan going with a raid in the second minute. Shrikant Jadhav scored his second raid point as U Mumba leveled the game at 3-3 after minutes. Kashiling Adake scored a raid point in the 10th minute as U Mumba led 5-4.

U Mumba scored two points in the first three minutes of the second half to lead 17-9. Sandeep Narwal scored with a two-point raid in the 15th minute as Puneri Paltan trailed 11-17. U Mumba were unfazed and Puneri Paltan had their moments to make a comeback. After 30 minutes, U Mumba led 19-13.

U Mumba led 22-20 after 35 minutes as they sent Deepak Hooda to the bench. Both teams exchanged points in the next one minute as U Mumba led 23-22. Puneri Paltan led for the first time 24-23 in 38th minute. U Mumba tied the game at 24-24 in 39th minute but Pune led again after scoring a tackle point.

Puneri Paltan held on to their nerve as they won 26-24 after producing a terrific second half performance.