Best from the rest 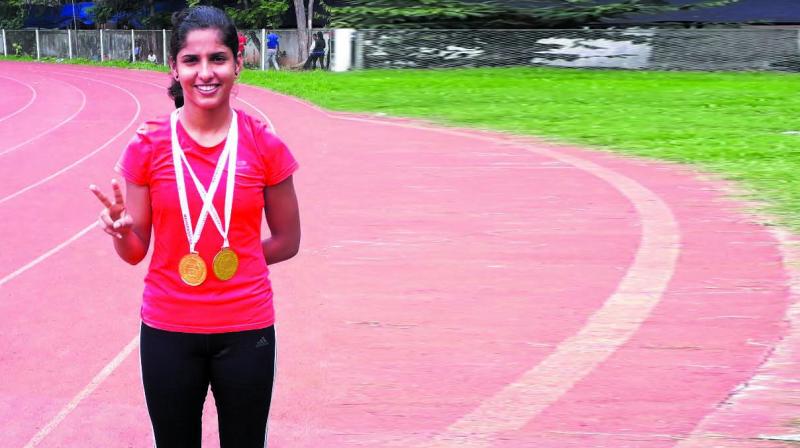 Nidhi Singh of Thane is all smiles as she poses with her medals.

Since the age of eight Nidhi Singh started running and she continues to do that by staying ahead of the rest. The 20-year-old athlete has just added to her tally of medals by winning three events in the two-day LIC-69th Maharashtra State Senior Athletics Championships at University Sports Ground, Marine Lines.

Nidhi won the women’s 400m, 400m hurdles and steered Thane to the 4x400m relay gold on Wednesday to complete a grand treble.

Nidhi, who was a member of the Indian team which won silver behind hosts Japan in the 2018 Asian Junior Athletics Championship in Gifu, Japan last June, ran quite a strong race but finished in a dismal time of 57.29secs which was much below her personal best of 56.4 secs. She was still well ahead of second placed Soniya Mokal of Akola (58.87secs).

She returned to the tracks and fashioned Thane team to victory in the 4x400m relay. Akansha Gawade, Snehal Shinde and Ekta Goulkar ran the first three laps before Nidhi completed the victory.

“I am satisfied with my performance. I could have done better but the conditions were rough and also there were fewer gaps between the events. Since I had three events I had to run four heats in 400m and three heats in 400m hurdles. But still I gave my best,” she said.

The S.K. Somaiya Degree College student Nidhi regularly trains in Thane under coach Nilesh Patkar. “ I practice on the concrete and am currently preparing for the nationals. I have been part of many national training camps and done well in many national tournaments. Now my target is to win medals at national level and be part of the international team,” Nidhi added.

Pune’s Jaykumar Gavde also won a sprint double winning the 200m - 21.48s, while  Akshay Khot and Ajit Singh both of

Thane won the silver and bronze.