Mondal elevated the benchmark of excellence earlier by winning his third gold medal with a national record breaking time of 02:10.93. 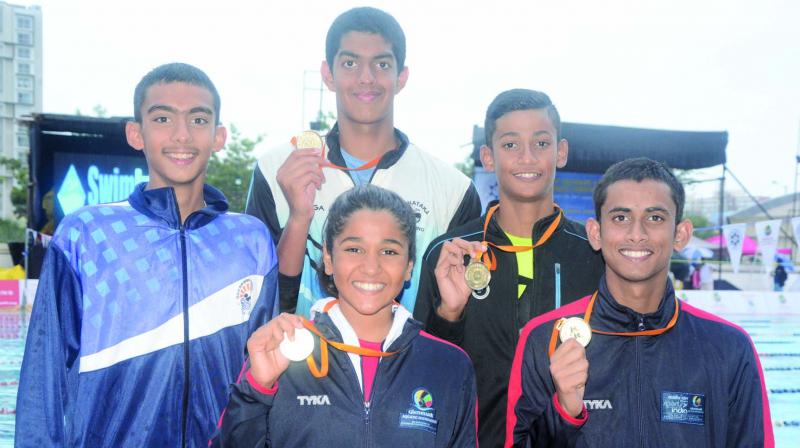 Swadesh Mondal won his fourth gold medal with yet another national record in the 100m breaststroke with a time of 01:07.51 on the third day of the Glenmark 35th sub-junior and 45th junior National Aquatic Championships in Pune. With this medal winning spree, Mondal, who trains  at the SAI Glenmark TIDM programme in Delhi and represents Bengal, has nearly managed to retain the individual championships for boy’s group II.

Mondal elevated the benchmark of excellence earlier by winning his third gold medal with a national record breaking time of 02:10.93. He is three years younger to previous record holder Neel Roy but clocked a time which was just 0.7 seconds lower.

Reigning overall best swimmer champion in the boy’s group I category Srihari Nataraj broke the national record in the 50m backstroke Boys Group I with a time of 00:26.31 breaking his own record set earlier in the championship.

Neel Roy lived up to his reputation of top seed by creating a new national record in the 200m Individual Medley boy’s group I breaking his own record set in 2014 clocking a time of 02:10.26.

Md. Rehan Mirza of Assam pulled of an upset by winning the boy’s group III 50 m breaststroke with a time of 00:34.61, creating a new national record in the process. The 4 X 100m medley relay boy’s group I saw Karnataka led by Srihari Nataraj set a new national record of 04:00.76. Delhi finished a distant second, clocking 04:06.42 while Bengal won the bronze with a time of 04:09.96.

One of Karnataka’s leading lights, Khushi Dinesh claimed her third gold of the event in the gruelling 1,500 m race for girl’s group I. She led from the start to finish comfortably by clocking a time of 17:58.81.

Ansu Kar, who is Mondal’s teammate from the SAI Glenmark Academy and Bengal, won his second gold in the 100 m freestyle boy’s group III with a time of 01:00.29.

Kiara Bangera, who swims at the Glenmark Aquatic Foundation representing SFI, swum an extremely well paced race to pip top seed Ridhima Virendra Kumar to win the 100 m freestyle in the girl’s group III with a time of 01:03.52.

FC Cosmos snatch a close 1-0 win over KSA Ambitious FC in a third division match of the MDFA League 2018-19 and played at the St. Xavier’s ground, Parel.

In an evenly-contested encounter, Cosmos scored in the 12th minute through Anand Navale and then defended their slender 1-0 advantage to come out victorious. In another match, Regal FA scored in the second period to hold Life Care Foundation SC to a 1-1 draw. Life Care opened the scoring through Ahad Shaikh’’s strike in the 24th minute and went into the break with a slender 1-0 lead. However, after the change of ends, Regal FA players put up a better display and managed to restore parity through Vaibhav Marde who scored in the final minute.