Sports   In Other sports  27 Dec 2016  Pressure in early career was much higher: Geeta Phogat
Newsmakers

Pressure in early career was much higher: Geeta Phogat

With the release of Dangal, Geeta and Babita are being seen at a number of places along with the cast of the movie. 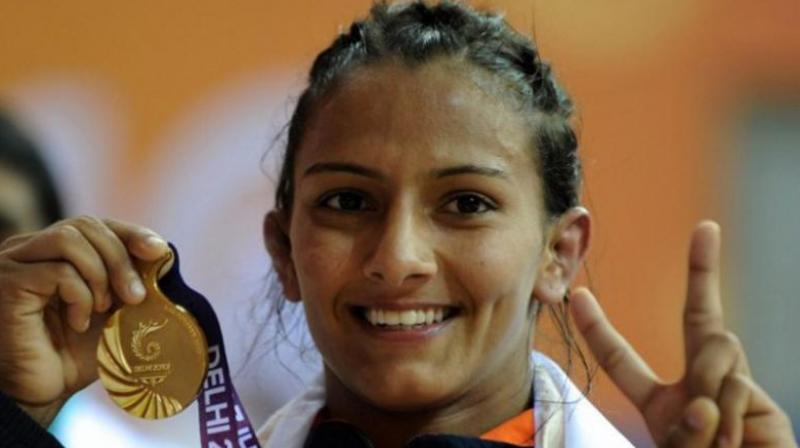 Geeta will be facing the Rio Olympics bronze-medallist Sakshi Malik, representing the Delhi franchise at the PWL-2. (Photo: AFP)

New Delhi: Geeta Phogat might be feeling the pressure of making a comeback in the upcoming Pro Wrestling League after a long injury lay-off but the celebrated grappler said it is nothing compared to the "tough training" she and her siblings went through during their formative days.

Inspired by the story of Phogat sisters – Geeta and Babita – and their hard taskmaster father Mahavir Singh, Aamir Khan-starrer 'Dangal' has set the cash registers ringing in box office.

"We had a very hard training during our childhood and I don't want to live it again. There were so many times when I felt like running away from the akhada. But now that we are bearing the fruits of all the hard work, we understand its value," recollected Geeta after the unveiling of the new logo and squad of the Uttar Pradesh franchise – UP Dangal – for PWL season 2.

"I am under a little pressure as I am making a comeback after a long time but I am confident as I have a very strong base and never shy away from my training."

Asked if she felt bad about being recognised more after the release of the movie than when they brought laurels to the country, Geeta confessed: "What I did in 2012 (won a bronze at the World Championship) or 2010 (gold in Commonwealth Games), I am getting recognised for it today.

"Obviously, it feels a little bad that we are not being recognised for our wrestling but more now that a movie is made on our lives."

Geeta will be facing the Rio Olympics bronze-medallist Sakshi Malik, representing the Delhi franchise at the PWL-2, but the 28-year-old said she was all prepared to take on anyone in her weight category – 58kg.

"Be it Sakshi or Tunisia's Marwa Amri (also Rio Games bronze medallist), I am prepared. I have been training.

Sometimes it boils down to a move or two and that makes all the difference. One never knows how a bout is going to pan out and even in last 2-3 seconds things can change. It's all about applying a technique. And I am working on it," she explained.

With the release of Dangal, Geeta and Babita are being seen at a number of places along with the cast of the movie but both Geeta and Babita insisted that they were still taking out time for their training.

"Yes, we have been busy with the interviews and all the promotion of the movie but still we make sure to train at least once everyday. Ideally we train twice a day. We cannot ignore our wrestling as whatever we are today is because of that. We have to give time to training no matter what," Babita, who is also a part of the UP Dangal team, said.

Babita said she was looking forward to learning new techniques from foreign wrestlers and also gain valuable experience from the PWL, starting January 2.

"I think we have a strong team this season. We have some good foreign wrestlers in our side and we are looking at learning a few tricks of the trade from them," said Babita.

On whether PWL would be introducing grassroot development programmes in future like other leagues, Director Marketing of Investors Clinic, Sunny Katyal, associated with UP Dangal said, "We would whatever the demands to help it grow further."

Other members of the UP Dangal team – Amit Dhankar, Amit Dahiya and Mausam Khatri – who were also present on the occasion, stressed on the importance of nurturing talent from an early age.

"The concentration should be on nurturing the kids. If they are given the right food and training, we would have more champions in our country," said Amit Dhankar.

Two-time Commonwealth champion in the 97kg category Khatri, also agreed, saying: "Once someone gets the medal then giving him/her facilities and money hardly make a difference. It has to be given to an athlete during the growing up years."