Racing against the odds: Venkatesh Shetty

Biking afficianado Venkatesh Shetty has limited funds to pursue his passion for biking, but that won’t stop him from achieving his goals. 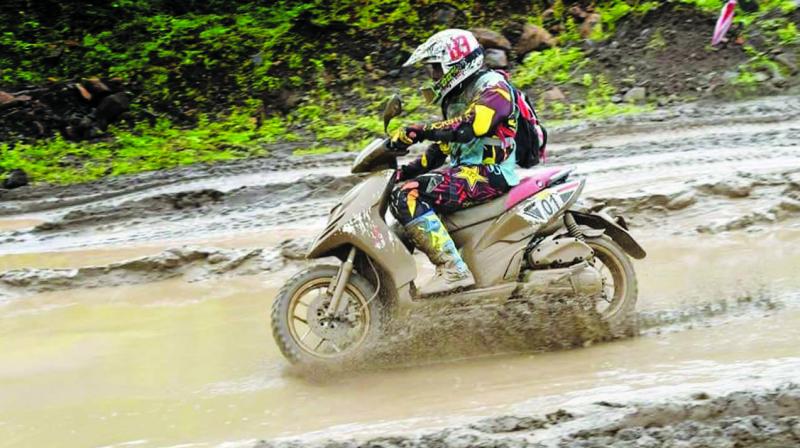 Venkatesh is a mechanic, which makes it obvious that he fancies bikes, but he also harbours a passion for racing at the same time.

A drive around Mumbai’s  finest road — Bandra Worli Sea Link, will lead you to Venkatesh Shetty’s garage. Venkatesh has rented a small place where he fixes and modifies bikes, while a major chunk of his earnings go towards supporting his racing endeavours. On Friday, at a slushy racing track in Nashik, he clinched the JK Tyre Monsoon Rally, completing a five-kilometre loop thrice over, in the picturesque Sarul Village, in just 19 minutes and 13 seconds.

Venkatesh is a mechanic, which makes it obvious that he fancies bikes, but he also harbours a passion for racing at the same time. Entering the race as an underdog last year, he  won the title then as well.

So what makes him an underdog after being a two-time champion?  Racing is a sport where it is all about sponsorship. Either you have enough money or there is a corporate sponsor having your back. Shetty has none. Whatever business he does, goes into his piggybank that funds his needs for racing.

Venkatesh says that he has not practiced for the last eight months. The only rehearsal he got was in the Indian National Rally Championships (INRC). “They broke the track in Nashik where we used to practice about eight months ago. After that, I was left with no option. Mumbai ki road pe  toh race nahi karega na?” he says.

“When I went for the INRC, I rented a Xylo car to put my bike and drove it with one my friends to Coimbatore. It costed us about 35 thousand rupees each. Every penny that I make goes into this. I have tried approaching all the sponsors possible but no one has responded,” he adds.

The bike that he uses is his own modified version of Aprilia 150cc. Shetty says that even they rejected his offer. “Last year, they put my name on their website as well. I spoke to their manager in Goergaon showroom but it is the same story,” he says.

Racing through the muck
When the race-day arrived, Shetty was edgy since he was out of practice and the venue had shifted from Mumbai to Nashik at the eleventh hour. There was light rain and a mucky field for the racers. He recalls that there were areas where mud was reaching his knees. “Dal-dal jaisa thha. When I started, I was nervous but the organisers in the Nashik did a great job to create such a fine track in such a short period of time,” he narrates.

He entered the tournament as an individual participant with TVS fielding three racers who bit dirt quite literally.