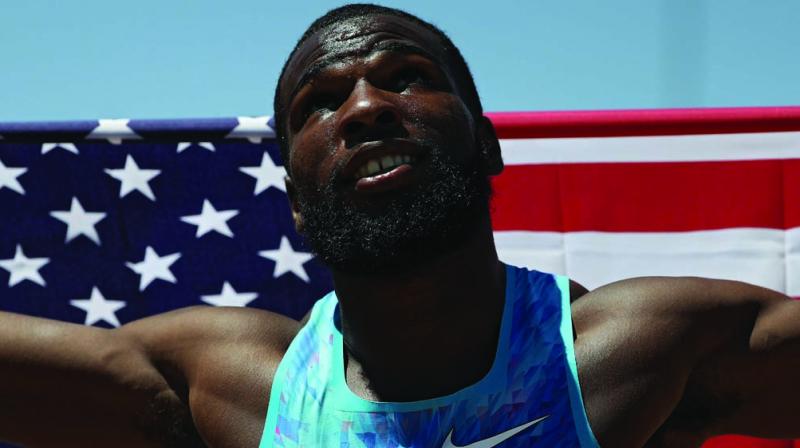 Sacramento: Rising star Christian Coleman’s weekend of disappointment continued on Sunday as he lost the 200 metres at the U.S. nationals and world championships trials to Ameer Webb. Coleman, beaten by Olympic silver medallist Justin Gatlin in the 100 metres on Friday, was pipped by 0.01 seconds by Webb who closed quickly to win in 20.09 seconds.

“It’s been a long weekend,” said Coleman, the year’s fastest man at 9.82 seconds in the 100 metres. “I felt my legs tighten up near the end, but no excuses. “It was a pretty successful week, qualifying for the team in two events.”

Co-favourite Noah Lyles’s world championship hopes ended when he withdrew from the semi-finals with a hamstring strain. Upsets also struck in the men’s 110m hurdles and women’s 200 on the final day of the selection meet for August’s world championships in London.

“We were running into a headwind, and that’s tough for a guy who only weighs 160 pounds,” Merritt said. Collegian Deajah Stevens took down Olympic bronze medallist Tori Bowie in the women’s 200, also run into a headwind.

Stevens won in 22.30 seconds, followed by Kimberlyn Duncan (22.59) and Bowie (22.60), all making the U.S. team. “I have never been to London so that is going to be fun,” said Stevens. “There are so many great American sprinters, it is great competition running with them.”

Muhammad won perhaps the most impressive women’s 400 metres hurdles race ever, blazing 52.64 seconds as three women dipped under 53 seconds in the same race for the first time in history.

Crouser delivered the longest shot put in 14 years, 22.65 metres, on his last attempt. “I came in a little more rested than usual, so there was a lot of power there,” said Crouser, now seventh best on the all-time list.

The toss came moments after reigning world champion Joe Kovacs had unleashed a throw of 22.35 metres for the lead.  Crouser and Kovacs will be joined on the U.S. world championships team by former U.S. champion Ryan Whiting(21.54).

Olympic silver medallist Sandi Morris claimed the women’s pole vault at 4.80 metres as she out-duelled London gold medallist Jenn Suhr (4.65m). The U.S. lost its top 800m runner, though, as the year’s fastest man Clayton Murphy was scratched from the final due to leg cramps.