Matches without fans are like glorified practice games: LeBron James 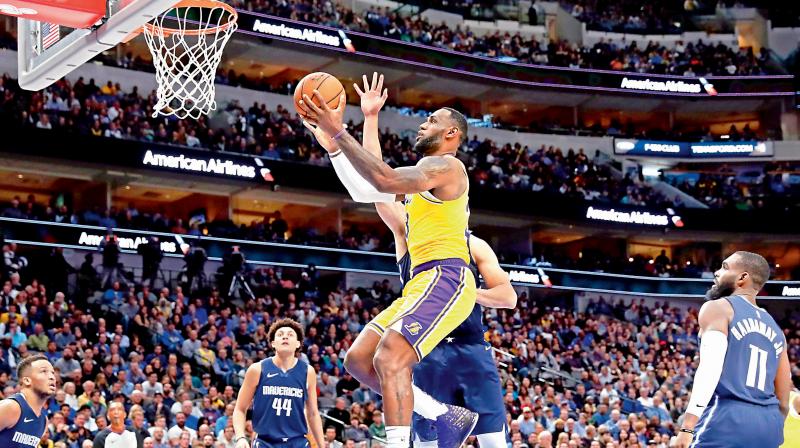 Los Angeles: Los Angeles Lakers superstar LeBron James, musing on the potential permutations of an NBA return in the wake of the COVID-19 pandemic, reiterated in a podcast aired Thursday he wouldn't relish competing without fans in the stands.

"What is the word 'sport' without 'fan'?" James said on the "Road Trippin'" podcast put out via his Uninterrupted multimedia platform.

"That's what also brings out the competitive side of the players to know that you're going on the road in a hostile environment and yes, you're playing against that opponent in front of you, but you really want to kick the fans' ass too."

He said a return to NBA competition -- which shut down March 11 after Utah Jazz big man Rudy Gobert tested positive for coronavirus -- would be more like glorified practice games if no fans were present.

"To get back on the floor, I would love it," he said. "I just don't know how we can imagine a sporting event without fans. It's just, it's a weird dynamic."

James joined the podcast from his home in the Los Angeles suburb of Brentwood.

He took some ribbing from hosts Richard Jefferson, and Channing Frye, both former Cleveland teammates of James, and Lakers media host Allie Clifton, when he mentioned he was speaking from his smoking room-cum-wine cellar.

'Break not a good thing'

as training regularly in anticipation of a return to NBA action this year. The 35-year-old three-time champion said he didn't think the enforced rest just as the season was steaming toward the playoffs was a good thing.

"The narrative that I don't like: 'Well, now guys get so much rest.'

"Or, like, 'LeBron, he's 35, he's got so many minutes on his body, now he gets so much rest,'" James said. "It's actually the opposite for me because my body, when we stopped playing, was asking me, like, 'What the hell are you doing?'

"I was right there turning the corner, like, I felt like I was rounding third base, getting ready for the postseason.

"So the rest factor, I think it's a little bit overblown."

It's not yet clear when play will resume amid widespread bans on large gatherings aimed at slowing the spread of the virus.

James thinks some sort of training period and a possibly shortened end to the regular season will be needed before a post-season can begin.

"One thing you can't just do is go straight to the playoffs," James said. "Because it discredits the 60-plus games that guys had been fighting for that position."

The podcasters suggested using those games to give teams battling for the final playoff spots a chance to play each other in an abbreviated play-in tournament. Top-ranked teams could face those out of the post-season hunt.

"It'll be very interesting to see what happens," James said.

The podcast came out on the day the Lakers were to have played the Cavaliers in Cleveland, and James admitted he was sorry to miss the trip to a city where he played 11 seasons and won the title in 2016.

"Think about all the great memories that we had. And then being able to play in front of my friends and family again. That would have been so cool. ... I'm kind of bummed out about that."