For Phelps to make a comeback after 2012 was never easy but his sheer determination and hard work made it possible. 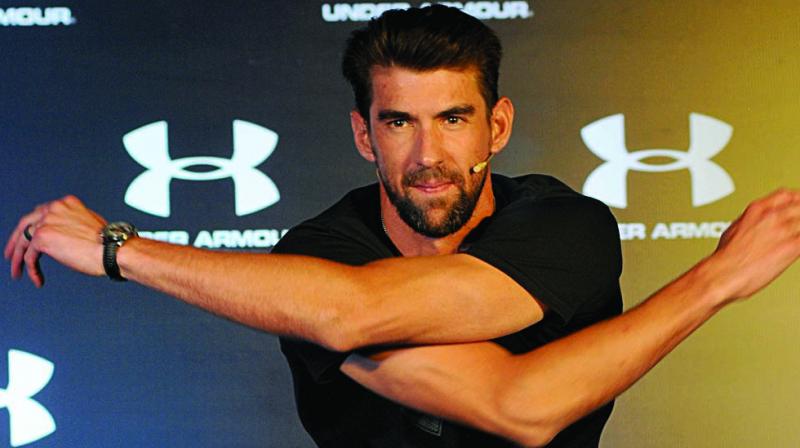 US swimmer Michael Phelps gestures during an interaction in Delhi on Tuesday. (Photo: BIPLAB BANERJEE)

New Delhi: The most decorated swimmer in history Michael Phelps has no plans to comeback again to spice up the 2020 Tokyo Olympics. The American legend announced his retirement after the 2012 London Games but two years later returned to the sport and went on to win six medals — five golds and a silver — at the 2016 Rio Olympics.

“In swimming you miss one day it takes two days to get back. So for me when I spent six years straight without missing a single day of training I was getting so much more benefit than other athletes who swam six days. I have lost it now there is no coming back now,” Phelps said on Tuesday.

“In the swimming world, I have been able to achieve whatever I wanted that’s what made 2016 (Rio Olympics) so good,” added the super-fit Phelps, who captured 28 medals at the Olympics, including a record 23 golds, and set 39 world records over the course of his career.

The American legend won all the events he participated in at the 2008 Beijing Games while in the 2012 Games, the ace swimmer went on to clinch four gold and two silver medals. But he hit a rough patch and went into depression after the 2012 Games, and he later revealed having contemplated suicide.

Phelps said he had learnt a lot from his “journey” and now has decided to dedicate his life towards spread awareness about the importance of a healthy lifestyle.

“I had my ups and downs but I never gave up because I wanted to win really bad and that’s what made me so successful.

“For me what I am doing now is continuing the tradition of talking about the importance of healthy lifestyle. It’s something that is so near and dear to my heart. I will continue to talk about mental health and stuff. All these things are very close to me,” the 33-year-old said.

For Phelps to make a comeback after 2012 was never easy but his sheer determination and hard work made it possible.

“I always say never give up on anything. If you dream is truly important to you then you will try to make that a reality. My career is a perfect example of it. It was not easy or fun but it was something I wanted more than anything and there was not a single day I stopped what I wanted to do,” he said at the opening of the first Under Armour store here.