The 42-year-old from Coimbatore who pulled off a stupendous drive to win the SuperGT race in Japan last Sunday is showing no signs of slowing down. 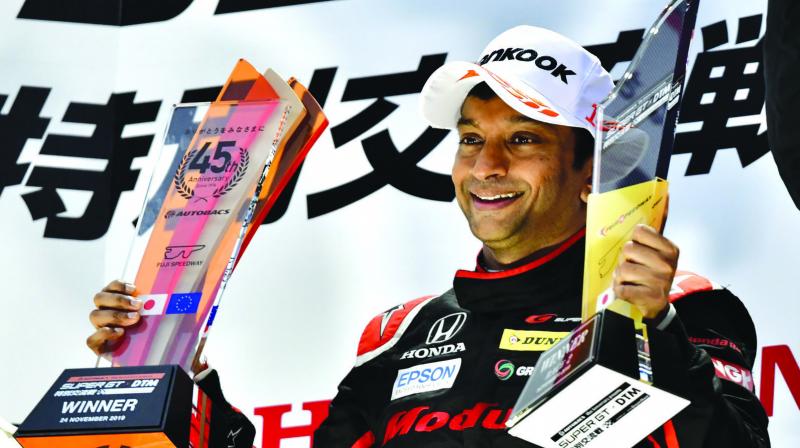 Narain Karthikeyan on the podium.

Chennai: Having completed a mindboggling 25-year journey as a professional race driver, Narain Karthikeyan belongs to that rare breed of Indian sportspersons who have proved age is just a number. The 42-year-old from Coimbatore who pulled off a stupendous drive to win the SuperGT race in Japan last Sunday is showing no signs of slowing down.

In a free-wheeling chat, Narain spoke about the importance of maintaining fitness, valuable lessons he learnt in Japan and the sorry state of Indian motorsport.

It’s 26 years since you turned professional, competing in the Formula Vauxhall Junior championship in the UK as a teenager. What keeps you going in a sport where sheer passion alone is not enough to sustain a career?

There are many factors. Of course, you have to love your sport enough to pursue it with the same passion you had as a youngster. Apart from that, you have to accomplish results at regular intervals to keep the sponsors happy and meet your own standards. And in motorsport, you have to be in the right place at the right time. Being a professional racer from India is not easy, as all these factors have to fall in place. I am extremely glad I have survived this long.

Fitness plays a major role in the success of a race driver. How has your training regimen changed over the last few years?

I don’t train like a 20-year-old. There’s no high-intensity training required for my physique. Also, this year’s SuperGT car is not as physical as the Super Formula car that I was driving until last year. SuperGT is, however, hard to drive, but it comes with some sophisticated technology.

For example, the specially-made airconditioning system keeps you cool inside the car.

One of the key factors is that there are no injury worries. My long-time physical trainer Ramji Srinivasan and my support system in Coimbatore take good care of me. Every day, I spend one hour for workout and one hour for recovery. I split these into two sessions.

After Formula One, you dabbled in LeMans Sportscars and then moved to Super Formula in Japan without much success. In your maiden season in SuperGT, you have finished on the podium twice, including a win. Do you feel that you should have joined this series a little earlier?

I think I found some success in Super Formula where I spent four years. Yes, I couldn’t win a race. It’s a highly-competitive series. Japan’s Kamui Kobayashi has been racing in Super Formula since 2015.

He is a very talented and experienced driver. He finished on the podium in F1 (third in the 2012 Japanese Grand Prix). But he hasn’t won a race in Super Formula. It clearly underlines the competition level in Japan. The Super Formula season is very short; only seven races in a calendar and you don’t get time to build up. To add to that, testing is limited. SuperGT cars are also quick; probably 4 to 5 seconds slower than Super Formula. But then, there are a lot of tyre manufacturers who pump in insane resources into the sport. During winter testing in Malaysia, we used 150 sets of tyres! SuperGT is a packed grid and you should know how to manage traffic. So, winning in Japan is always special.

This win should inspire you to go on for two-three years more in the same series...

Two-three years is a lot of time in motorsport. It’s a yearly contract that I have signed. The manufacturers (Honda) will take a call on the extension.

Sunday’s win at the Fuji Speedway came after almost six years. How do you rate the win in Japan compared to your previous triumphs in A1 GP, Auto GP, Nissan World Series?

When I won in the Nissan World Series (2004), my competitors were all young drivers, trying to move to Formula One. On an experience level, World Series was a level-playing field. In the current SuperGT, drivers come with a wealth of experience. Winning in Japan is always tough, perhaps the toughest outside of Formula One. Apart from driver experience, the technology that the series uses makes even Formula One look small. It’s a different world, altogether.

You have raced in different parts of the world. You have been racing in Japan since 2014. What was your biggest takeaway from the Japan stint?

Tracks here are very challenging. They are old-school; narrow and very fast. A small error is enough to throw you out of the race. The local knowledge of these experienced drivers is phenomenal. In the beginning, I was finding it difficult to communicate with the Japanese engineers.

Then, I made an effort to learn a few racing terms in Japanese. The time I have spent in Japan has taught me some valuable lessons. Japanese people are very orderly and do everything meticulously. They have a system in place and if you follow it, you will achieve success.

Being accepted in Japan, I would say, is one of the craziest experiences. They have made me feel like I am a part of them. The Japanese love racing. The number of fans who throng the circuits on race weekends is crazy. They recognise you in restaurants. They look after you better than the Europeans.

Aren’t you bored spending time in flights and hotels?

Travelling is the hardest part of any professional sportsperson’s life. But I feel, it’s getting easier. There are different route options and direct flights to faraway places. As a youngster, when I first started travelling, I didn’t have the luxury of flying business class.

Indian motorsport has seen quite a few controversies in the recent past. You’re one of the very few to have stayed away from all that. What’s your take on the status of motorsport in India?

What saddens me is the fact that motorsport is still such a small sport in India. It’s like a blip on the radar or nothing at all!. But there are so many unwanted controversies.

I think the fraternity should invest their energy in moving to the next step. The motorsport scene has been stagnant. Except for a handful of drivers who are out on their own, nothing has changed.

Would you take up a role in the administration, just like your father, when you retire from the sport?

99.99 per cent, I will not involve myself in administration. Seriously, I don’t have time to waste! It’s not about one individual changing the system.

A set of people have to come together and work towards that change. Of course, there are some good people in the federation and I am not doubting them. But there are also people with an agenda. In every sport, this is the case, but all the more in motorsport which is still trying to take baby steps. Administration is something I am not cut out for.

Who is the next big bet in Indian motorsport?
Jehan Daruvala who is currently competing in the FIA Formula 3. Maini brothers — Arjun and Kush — are also good. Jehan has the talent to become a professional driver at the highest level. But as we know, talent alone won’t take you to F1!